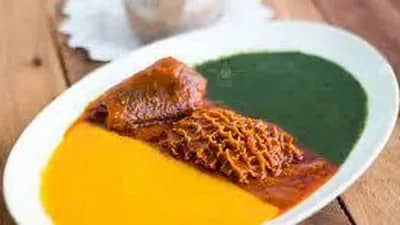 Nigeria is mismatch of cultures and ethnic groups. Even within the same state, there are a diversity of people with different languages and cultures so distinct they could be a separate nation-state.

The soup you like would be influenced by where you were born or grew up, and your tribe.

The South-South, South-East have soups that are different from others in the South West.

Here is a list of my best soups made by the South-South and South Eastern people of Nigeria.

People of the South-South seem to have the most soups because of their closeness to water bodies, they use animals found in the sea.

Some soups in the South-South and South-East are:

▪︎Nsala Soup is one of the most delicious soups around. Also known as Ofe Nsala, it is a common soup made with fish, yam, utazi leaves and other ingredients.

▪︎Edikaikong Soup tastes like a party is happening in your mouth. It is made from ugwu leaf, water leaf. What differentiates Edikaikong from Efo Eiro is beef, Stockfish, periwinkles, beef, stockfish, ponmo.

▪︎Okazi Soup is a variation of Edikaikong. Usually made by the people of Akwa Ibom. It is made from smoked fish, dry fish, vegetable, Achara, ofo powder, ogiri soup. Mostly local spices. If you have taken okazi soup, then you would know that soups are essential to life.

▪︎Banga Soup is one of the most popular and delicious soups from the South-South. It made from palm fruit, dry fish, crayfish.

▪︎Rivers Native Soup: If you have a taste of this soup and you do not like it then come back to me for a refund. It is made from stockfish ear, periwinkles, palm oil, cocoyam and so on.

▪︎Best soup from the South-West are;

The South-West soups are relatively easy to prepare

▪︎Egusi is on the soup hall of fame in Nigeria prepared by all ethnic groups in Nigeria, it has a special place in the heart of the Yoruba people. Called efo elegusi by the Yorubas. It is made from melon seeds, bitter leaf, ugu leaves, stockfish and so on.

▪︎Ewedu: A Simple soup that tastes better with pepper stew. It made from grounded ewedu leaves, locust beans, water etc.

▪︎Gbegiri is a nutritious soup made from beans, fish, and crayfish.

▪︎Efo riro is made from green vegetable or spinach. It can be referred to as the Yoruba variation of ndikangkong

▪︎Gbegiri and Ewedu, ask any Yoruba person nothing tastes better than a mixture of ewedu and gbegiri, taken with amala. (Pulse.Ng)