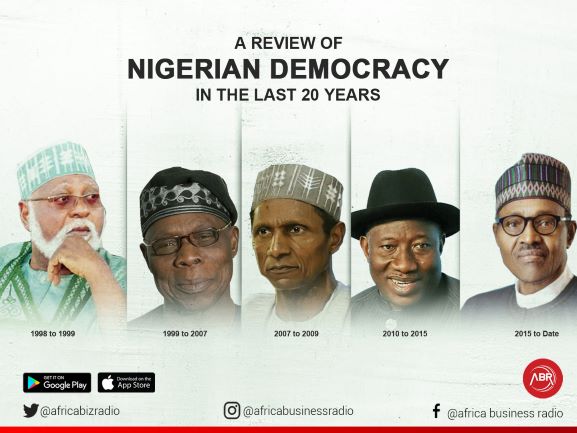 Based on these statistics, Nigeria’s democracy is classified as a Hybrid Regime. The hybrid regime is the next to the authoritarian regime. Nigerian earned this classification due to the poor state of its election processes and outcomes, the corruption index, judiciary performance, and press freedom.

The President’s democracy day speech spoke to all but the major global index that measures the state of Nigeria’s democracy. According to the Economist’s Democracy Index, Nigeria ranks 109 out of 166 with an overall score of 4.12 in the ratings of democratic nations.

A revision of  Nigeria’s democratic index score for the last 5 years shows that the score is on a decline since 2015. The score increased by 22.8% from 3.76 in 2014 to 4.62 in 2015. This increase was most likely due to Goodluck Jonathan’s democratic acceptance of defeat as the incumbent president at the 2015 polls.

At the regional level, Nigeria ranks 20 out of 44 countries in Sub-saharan Africa. The index is computed based on five components of democracy. They are electoral process & pluralism, the functioning of government, political participation, political culture, and civil liberties. Nigeria only obtained an above-average score in the electoral processes and pluralism component.

Based on these statistics, Nigeria’s democracy is classified as a Hybrid Regime. The hybrid regime is the next to the authoritarian regime. Nigerian earned this classification due to the poor state of its election processes and outcomes, the corruption index, judiciary performance, and press freedom.

Nigeria’s elections are often characterized by substantial irregularities in elections that often prevent them from being both free and fair. The Perception of Electoral Integrity Index ranks Nigeria 86th among 166 countries with electoral integrity in the world. In sub-Saharan Africa, Nigeria is 13th on the list of 44 countries with electoral integrity. These statistics do not speak well about Nigeria’s democracy and the hope for its sustainability. Although there is more to democracy than free and fair elections, there can be no democracy without them.

Corruption tends to be widespread and the rule of law is weak. Nigeria is the 146 least corrupt nation out of 180 countries, according to the 2019 Corruption Perceptions Index reported by Transparency International.

A trend review of Nigeria’s Corruption Perceptions Index shows that in the last 10 years Nigeria has not gone into the position of the first 130 least corrupt countries. A position that most African countries like Gabon, Mali, Zambia, Niger, Guinea, Malawi, Sierra Leone, Ivory Coast, Egypt find themselves in.  Countries like Ghana, Gambia, Ethiopia, Tanzania, Tunisia even find themselves in the first 100 positions of least corrupt countries.

A democracy government requires strong safeguards against official corruption, which erodes public services and citizens’ trust in the system. Corruption can also give unfair advantages to incumbent politicians and create pathways for malign interference by foreign powers. Accountability and transparency ensure that malfeasance is exposed and that failed or harmful policies are swiftly corrected. The independent nature of the judiciary also weakens the corruption perception of Nigeria.

A measure of the degree of civil liberties and political rights in every nation shows that the Civil society in Nigeria is weak. According to the Freedom in the world index, Nigeria is partly free. While other African countries like Ghana, Namibia, Senegal, South Africa, Botswana have attained free status because of their civil society freedom. In Nigeria, the government makes efforts to suppress nonviolent expression, far from ensuring peace and stability. This allows unseen problems to fester and erupt in far more dangerous forms.

The norm that democracy depends on the guarantee of equal rights under law and freedom from discrimination for all individuals in a society is not obtainable in Nigeria. For instance, the majority of political appointments are given to individuals from a certain ethnic group of the president. Those forced to endure a subordinate status have less incentive to play by the rules, creating a vicious circle of defiance and repression.

The ability of journalists to report freely on matters of public interest is a crucial indicator of democracy. Typically, there is harassment and pressure on journalists. The harsh treatment meted to journalists in Nigeria reflects on her PRESS FREEDOM RANKING. Nigeria is 115 out of 130 countries with restricted media freedom. In this ranking, Nigeria obtained a high abuse score of 47.71 out of 100 which shows the intensity of abuses and violence against media actors during the period evaluated. Likewise, the long period of imprisonment of professional and non-professional journalists are also regarded as abuse.

A free press can inform citizens of their leaders’ successes or failures, convey the people’s needs and desires to government bodies, and provide a platform for the open exchange of information and ideas. When media freedom is restricted, these vital functions break down, leading to poor decision-making and harmful outcomes for leaders and citizens alike.

Other Measures of Democracy

Moreso, the GINI index shows that attaining sustainable democracy is still a little bit far fetched. The GINI index measures the extent to which the distribution of income or consumption expenditure among individuals or households within an economy deviates from a perfectly equal distribution.

In contemporary times, democracy has turned out to be the most supported political tool for development and social change. This has attained near-global acclaim and admiration by many world leaders. After more than sixty years of independence from the British colony, and 21 years of uninterrupted democracy,  the scenario in the country remains disappointing.

What accounts for Nigeria’s Bad Scores

In Nigeria, democracy is totally misinterpreted and wrongly practised. A good number of explanations have been devised to account for this dwindling state of affairs. These include corruption through mismanagement of public funds, poor macroeconomic policies, public malfeasance, inequality, as well as poor political will.

Democracy ought to guarantee regular free and fair elections; freedom of expression and association; accountability of the State’s administrative organs, universal suffrage; equal rights and participation of the local citizens in the formulation of and implementation of development plans, and as well, guarantee security to the entire populace. Most importantly, democracy should be able to enhance the provision and equal distribution of resources and basic human needs, and as well, enable a fragile State to manage its divides peacefully.

Until these are efficiently practised to reflect in the global indicators of democracy measured, Nigeria will remain on a long way to attaining sustainable democracy and this will negatively affect her quest for sustainable development.

Respect for culture and tradition as President Olusegun Obasanjo kneels to...