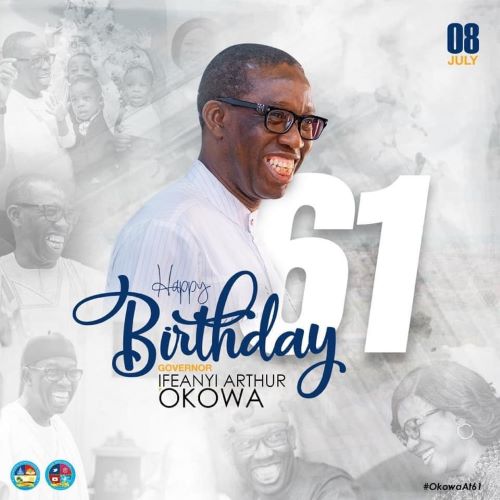 The Peoples Democratic Party (PDP) has congratulated the Governor of Delta state and Chairman of South South Governors’ Forum, Governor Ifeanyi Okowa as he marks his 61st birthday.

The party in a statement by the National Publicity Secretary, Kola Ologbondiyan, described Governor Okowa as an outstanding patriot and excellent administrator, who has dedicated his time, energy, resources and intellect towards the development and wellbeing of not only his state, Detla, but also the Niger Delta region and the nation at large.

The party further stated that “Governor Okowa is a serious minded, down-to-earth and people-oriented leader, whose selfless service to the people, as a medical doctor, senator of the Federal Republic and now, the executive governor of Delta state, has brought pride to our great party, the PDP, and the nation in general.”

The party also noted with pride the achievements of Governor Okowa with the massive infrastructure and human capital development in critical sectors of life across the three senatorial districts of the state, in line with the manifesto of the PDP and the vision of the party’s founding fathers.

The PDP also applauded Governor Okowa for his efforts towards the development and stability of the PDP at all levels, particularly during the party’s trying time.

They joined millions of Nigerians in felicitating with Governor Okowa and praying that the Almighty God would grant him good health at this critical time in his life as well as imbue him with strength and courage as he continued in his service to his state and the nation at large.

Sunday Igboho: All you need to know about the man unsettling herdsmen’s stay in Yorubaland

Bolu, Dr Doyin Okupe’s 27-year old son, declares “I am a gay”; father says “it is a spiritual challenge”