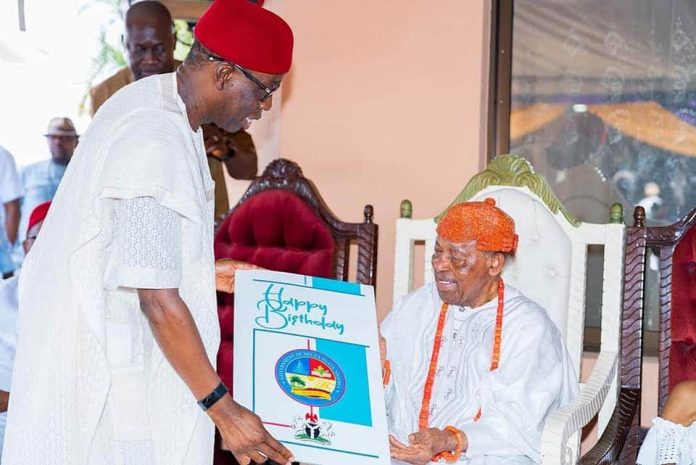 Governor Ifeanyi Okowa of Delta has congratulated the Asagba of Asaba, Obi (Prof.) Chike Edozien, on his 95th birth anniversary.

The governor said that the Asagba had provided purposeful, courageous and tenacious leadership for the Asaba people over the years and deserved to be celebrated on his new, great and enviable age.

In a statement by his Chief Press Secretary, Olisa Ifeajika, in Asaba on Tuesday, the governor commended the monarch for making Asaba peaceful and investment-friendly since he ascended the throne of his forefathers 29 years ago.

He joins the Edozien family and people of Asaba at home and in the Diaspora, in celebrating the nonagenarian monarch, scholar per excellence, bridge-builder and elder statesman on this outstanding point in his journey of life.

The governor prayed that the traditional ruler would remain in good health, wisdom and strength to continue ruling the people of his kingdom.

He lauded the erudite professor and monarch for his contributions to the development of Asaba and for being a good host to Deltans and Nigerians as the traditional ruler of the capital city of Delta State.

Okowa added that His Majesty also initiated cultural and traditional reforms for the enhancement of the living conditions of the people of the kingdom, and ensured their appropriate recognition and strategic relevance in the ever-important traditional institution in our society.

“On behalf of the government and people of Delta, I warmly felicitate with His Royal Majesty, Obi (Prof.) Chike Edozien, CFR, the Asagba of Asaba, on the occasion of his 95th birth anniversary.

“We pray that the Almighty God will continue to give you good health and wisdom to pilot the traditional affairs of your kingdom and offer valuable contributions to the development of our dear Delta State and Nigeria,” he stated.

ANALYSIS-How fast does it spread?: Scientists ask whether Omicron can outrun...