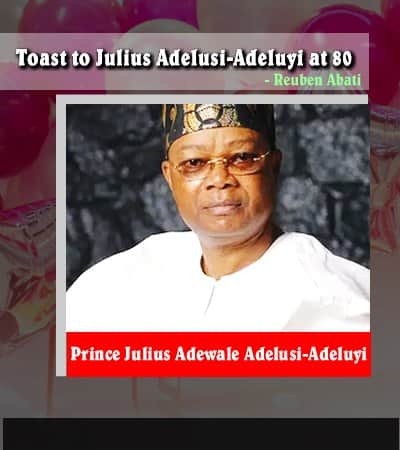 Prince Julius Adewale Adelusi-Adeluyi who turns 80 this week, on Sunday August 2nd, was our guest on Arise TV flagship programme – The Morning Show – yesterday, and although I had made some comments about this national icon in the course of that engagement, the format of a television interview does not really provide me enough scope for an extended appreciation of a man who is one of the most impressive, kind-hearted and inspiring persons that I know. I met Prince Adelusi-Adeluyi in the early 90s. The university where I taught Sociology of Literature, General Studies, Shakespeare and His Contemporaries and Modern African Drama had been shut down for about a year. This forced me to pay more attention to journalism, which I had been doing part-time since 1985 writing for romance magazines (I was Contributing Editor with Hints and Channelle magazines, and later Hearts magazine). I also wrote copiously for the mainstream media. Bored with sitting on campus which had become ghost town, I relocated to Lagos while waiting for the seemingly endless strike to end. I got trapped.

From being Editorial Page Editor at The Hammer newspaper, I ended up on the Editorial Board of The Guardian. Life assumed a meaning of its own from that point. I would soon become a popular book reviewer, my very first being one of General Olusegun Obasanjo’s books, and that opened up so many opportunities. It was in the course of all that talk here, talk there that I met Prince Adelusi-Adeluyi. He gave me his card and asked me to come and see him. “I think we have got something special here. I can see your potential. I read your writings and I see you going up and down giving a lecture here, a talk there, you review books and you seem to do everything so well. But you know, in this country, you can burn yourself out, just running up and down and it may never amount to anything. You have to be focused, disciplined, organized. You need to brush things up. Come and see me, we will talk a lot more.”

I went to see him. His office then was at Oregun. A three-storey imposing building in a modest street. The ground floor was a warehouse. The staff occupied the first floor. If I recall correctly, the second floor was divided into conference halls and meeting rooms. Prince’s office was on the top floor. As I went up to his office, my attention was caught by one particular item, a small board on the wall which contained stick-on notes of quotations about life, success and leadership, all notes written in his handwriting and with proper acknowledgement of the original source. I found that quite impressive and his secretary then was definitely ultra-efficient. When I was ushered into his office, a very big office, stretching from one end of the building to the last wall, I thought I was back at a University Library. From top-down and all around, there were books on virtually every subject in the world, all neatly arranged.

I have met quite a number of persons who are literally obsessed with books and documentation – General Aliyu Gusau, Odia Ofeimun, Kunle Ajibade, late Professor Dapo Adelugba, Professor Pat Utomi… but when I saw Prince Adelusi-Adeluyi’s library at that time, I was shocked. I came to Lagos with the impression that most people in Lagos were just after money, and that the serious-minded persons could only be found at the schools of higher education and media houses. My impression changed after that initial encounter with Prince Julius Adelusi-Adeluyi. The man knew something about everything. As we chatted, he would stand up, go to an exact spot in his library and produce a book to back up his point. I discovered that apart from the stick-on quotes on the board that I saw, he kept a special diary of quotes on virtually every subject. I asked him why? He said as someone who got invited to speak on various subjects regularly, he needed to read and do research on a permanent basis and if he read anything he loved or found useful, he would immediately keep a record of it.

It was dazzling. I was excited making his acquaintance. But as I got up to go, I was shocked when he commented on my dressing. “I see you like this your adire, revolutionary attires a lot.” As a graduate student/assistant and later university teacher, I acquired quite a handful of adire (batik) materials which were sewn in different designs. It was popular material on campus. Our own teachers wore the same material or opted for the popular Ankara. These materials were affordable, and the designs looked good. We were trained to promote African culture and scholarship, certainly not to become coxcombs. I didn’t in any way feel inferior to anyone dressed up like a mannequin on the pages of GQ. In fact, my friends and I used to laugh at such persons. When I left the campus (my salary then was N900) and I got my first salary of N3,000 at The Guardian, I went to Oshodi market and bought more materials and sewed a wardrobe-full of caftans. Prince Adelusi-Adeluyi didn’t think that was good enough.

Monguno’s Missing $1B: Fraud or Freudian Slip? By Festus Adedayo

Nigeria’s #ENDSARS protests: a window into how creative art can be...