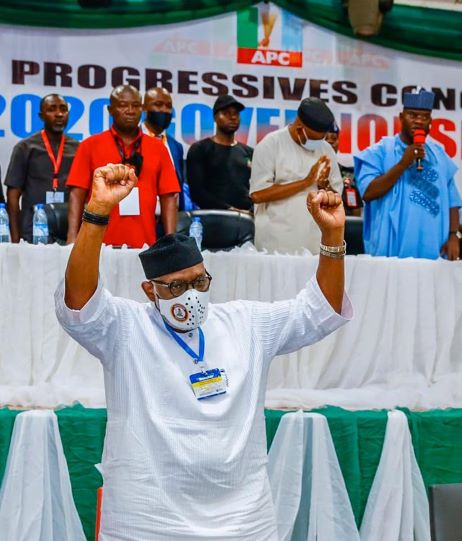 The organised labour Unions and the Ondo state government have agreed to the approval of the immediate payment of five months outstanding deductions from Salaries of the state workers from February to June, this year.

These formed part of the decisions reached by both government’s representatives and labour unions when Akeredolu held a crucial meeting with them in Akure.

The organised labour under the Joint Negotiating Council (JNC) had, two weeks ago, sent a letter to the governor to demand payment of some of the workers’ outstanding entitlements ranging from 2018, 2019 leave bonus, unpaid accumulated deductions from February 2020 till date.

Speaking on behalf of the government, the State Head of Service, Mr Dare Aragbaiye, as well as the Commissioner for Information and Orientation, Mr Donald Ojogo, said the government would also settle Special COVID-19 hazard allowance of May 2020 of health workers.

Mr Aragbaiye noted that out of the available resources of government, sixty-eight percent of June salary and pensions would be paid to local government workers.

Also speaking at a labour meeting in Akure, three unions’ leaders, Comrade Oluwaniyi Fabunmi of JNC; Sunday Adeleye-Oluwole of NLC and the vice chairman of TUC, Clement Fatuase, said they agreed to the payment arrangements to save workers who had mortgaged their salaries with cooperatives and loans from untold hardship.

The labour leaders declared that the latest agreement would go a long way in strengthening harmonious relationship between the Akeredolu’s government and the labour unions in the state.

Ojogo said, “in line with the spirit of Mr Governor who had insisted and still insisting that the welfare of workers will be given premium attention, he has approved the following which has also been accepted by the leadership of the labour unions; that the deductions for the state from February to June 2020 should be paid in full.

“These decisions were equally agreed upon by the leadership of the labour union and we know too well that this government has enjoyed a very robust relationship with the labour,” Ojogo said.

While emphasizing that the gesture by government should not be misconstrued for political gains, Ojogo stated that the welfare of the workers has always been utmost concern to the Akeredolu-led government.

According to him, “Some might want to say that it is because elections are approaching that this government is taking steps. It is not true, that should be far from it.

“After all, elections were not around the corners when Mr. Governor decided to commence the payment of salary arrears of the workers. Out of the seven months arrears, we have only one month remaining which will be attended to in due course.”

While briefing other unions leaders at an enlarged meeting over the development, the JNC Chairman in the State, Mr Oluwaniyi Fabunmi, his counterpart in TUC, Mrs Helen Odofin who was represented by her vice, Clement Fatuase and NLC Chairman, Sunday Adeleye, expressed satisfaction with the development

They stated that “we met with government, the governor himself presided over the meeting where we agreed that for now when the July allocation comes from the federation account coupled with what is generated from the state not minding the fact that during this COVID there is low IGR.

“We agreed that the July allocation should be used for the payment of five months deductions, from February to June, leave bonus for 2018 as well the 2019 leave bonus to a certain level.

“In addition COVID allowances will be paid to health workers both at the local and state level.”

Fasoranti endorses Tinubu for president in 2023, says he has all...

CAS on operational visit to Zamfara, charges troops to be focused...