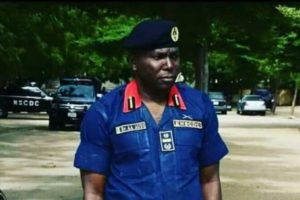 The Nigeria Security and Civil Defence Corps (NSCDC) has commenced the selection process into the its proposed Special Female Squad.

A statement on Friday by the Director, Public Relations, NSCDC, Olusola Odumosu, the selection process was from the Corps’ array of ‘gallant’ female officers drawn from various Commands of the Federation including the Federal Capital Territory (FCT).

He said the flag off of the selection process was done by Commandant General of the NSCDC, Dr Ahmed Audi, at the National Headquarters of the Corps in Abuja.

He said the Special Female Squad was one of his many strategies to reposition, re-jig, revamp and rejuvenate the Corps to a world-class organization.

His words: “The Female Squad which will compete favourably with their male counterparts in all ramifications will undergo three weeks (3) intensive and rigorous training as well as capacity building programmes in one of our Training Colleges after the successful ones scale through the preliminary tests of competence, experience, psychological evaluation and comprehensive medical examination to determine their fitness for the programme.”

Audi disclosed that plan was underway to make the proposed Female Squad combat ready and formidable as they would be specially trained for physical and tactical maneuvering especially for special intervention and operations which would in no small measure help to address some of our internal security challenges.

While assuring the candidates of his administration’s resolve to providing the necessary logistics and minimal comfort during the training, the Commandant-General tasked them to put in their best as this would go a long way in restoring the past glory of the Corps.