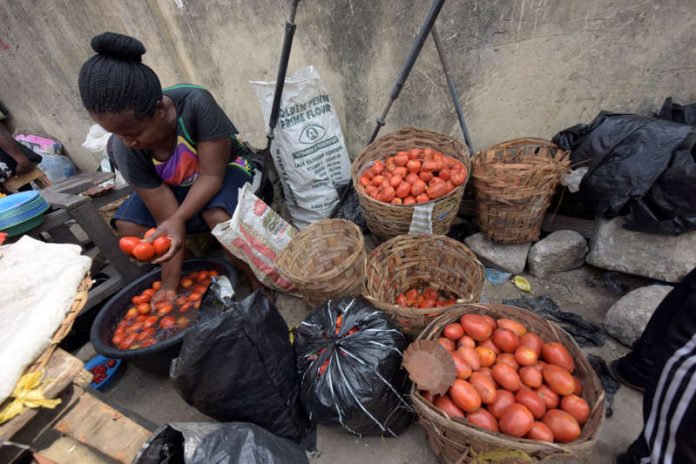 Food prices in West Africa have jumped more than 30% since last year to their highest levels in nearly a decade due to coronavirus lockdowns and a decline in cereal production, the World Food Programme (WFP) said Friday.

More than 31 million people are expected to become food insecure between June and August, raising the risk of a health emergency as the region contends with conflicts and COVID-19, the U.N. organisation said in a statement.

FILE PHOTO: A vendor washes tomatoes in a bucket before putting them on sale in the Obalende district of Lagos, Nigeria. (PIUS UTOMI EKPEI/AFP/Getty Images)“Soaring prices are pushing a basic meal beyond the reach of millions of poor families who were already struggling to get by,” said Chris Nikoi, WFP’s Regional Director for West Africa.

Across the region, prices of local staples such as rice are nearly 40% higher than five-year averages and in some countries staples cost more than double their average price, WFP said.

Attacks by Islamist militants have escalated in the Sahel region, an arid belt to the south of the Sahara Desert, driving people off farmland in Burkina Faso, Mali and Niger and cutting access to supplies.

The Sahel region alone accounts for approximately half of the 10 million children under five in West Africa who are acutely malnourished in West Africa, WFP said.

About 800,000 of the nearly 2.7 million people WFP has identified as being at risk of famine are in Nigeria’s arid northeastern states, where millions have been displaced by the long-running Boko Haram insurgency.

Up to 65,000 people in Nigeria’s northeast are currently on the run after an attack by armed groups on Wednesday killed at least eight people and injured a dozen more. (Reuters)
Please follow and like us: