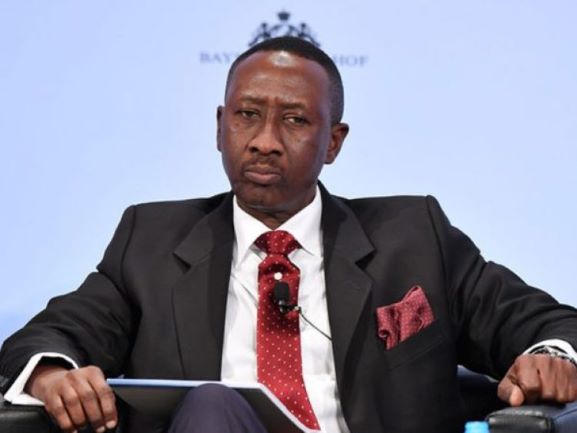 The National Security Adviser (NSA), Maj. Gen. Babagana Monguno, on Thursday, lamented that the renewed terrorist activities in the North East have put the military and security agencies in difficult situation.
Monguno however called for assistance from all quarters, such as the one offered by the North East Development Commission (NEDC) to help in the war efforts in the troubled region.
The NSA made the call on Thursday at the official launching and handing over of 120 operational vehicles to the military and other security agencies in addition to the handing over of ambulances and medical equipments by the federal government through the NEDC to federal medical institutions and centres across  the Northeast.
He said: “The resurgence of terrorist activities in the North-East after several years of relative lull has put the military and other security outfits in the region in a difficult situation for many reasons, and any assistance from any quarter of the Nigerian State, such as what the North-East Development Commission (NEDC) has embarked on today, is welcome.”
He noted that: “Promotion of stability in relations between the military and the civil populace in the North-East is part of the mandate of the NEDC. By demonstrating confidence in the Armed Forces and the other security outfits through providing multi-dimensional support to their efforts, in addition to the Commission’s collaboration with the Office of the NSA in delivering the DDRR Action Plan, the NEDC is accelerating the pace for achieving peace in the region, without which it cannot implement the major part of the mandate for which it was established, that is rehabilitation and development of the North-East states after the long insurgency.”
He added that: “The significance of today’s event, therefore, must not be lost on us amid all the speeches and protocol etc. The NEDC has demonstrated concern for the plight of all the security agencies and, I understand that even the tertiary health institutions in the region have not been left behind, but what the NEDC is doing is really for itself! The Commission is boosting the capacities of stakeholders in the security and health sectors of the North-East to assist it to bring about a secure and stable environment to enable it to implement its mandate.”
Speaking, Hajiya Sadiya Umar-Farouk, the Minister for Humanitarian Affairs, Disaster Management and Social Development, said the restoration of peace and stability in the Northeast region is one of the cardinal objectives of president Muhammadu Buhari’s administration.
She said the devastation caused by the Boko Haram terrorists since 10 years ago is colossal, hence the need to put enormous effort for early recovery, rebuilding, resettlement, peace building and long term development of the region.
She said: “All hands must be on deck by all stakeholders to surmount the renewed security challenges to enable meaningful development recovery of the Northeast region which is estimated to cost about $9 billion.”
In his remarks, the Senate President, Sen. Ahmed Lawan urged NEDC to collaborate with Borno state in reconstruction of damaged roads as well as resettlement of the IDPs.
Lawan, who was represented by Senator Ali Ndume, appealed to the Minister of Humanitarian Affairs, Disaster Management and Social Development to allow Borno citizens apply manually for the N-Power, which Portal is to be opened on Friday, noting that most local government areas of the State don’t have access to internet facility.
He said: “Honourable Minister, most local government areas of the State don’t have access to internet facility and when you want the to apply online, many will lose the opportunity of benefiting from the N-Power program.  They should be allowed to fill the form, submit to your office for someone to upload.”
Also speaking, the managing Director, NEDC, Mohammed Alkali, said the Commission is ready to kick – start an elaborate Education Endowment Fund , which is designed to improve the regional human development indices through various scholarship and training programmes for youths, women, people in sports and the Almajirai.
He said: “Similarly, we are also set to roll out the Rapid  Response Intervention Projects in Education, Health, Agriculture and WASH sectors across all the 112 local government areas in the Northeast region.”
Responding , Borno State Governor, Professor Babagana Zulum expressed appreciation to what the Humanitarian Minister and the NEDC which is under her ministry is doing for the Boko Haram ravaged people of Borno State.
Zulum said  the NEDC has played a key role in coming out to address the challenges of the State as a result of insurgency.
He appealed  to the Nigerian Military to reduce the incessant attacks by Boko Haram terrorists  in the State to create enabling environment for farmers to go back to their farmlands.
He said: “We must tackle the root cause of insurgency which is poverty and illiteracy. Security agencies should be more resilience, as Borno and the whole country is praying for their success against the insurgents.”
Please follow and like us:

SEGUN ONI – TOUCH NOT MY ANOINTED, AND DO HIM NO...

It’s in our interest to strengthen Gulf of Guinea Commission, says...

Plant a tree, save environment for humanity – Aregbesola