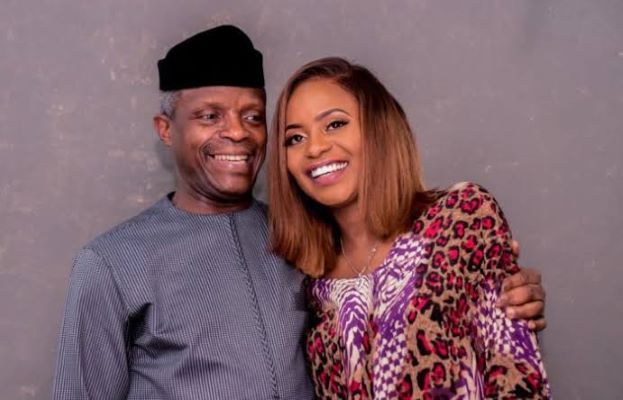 Kiki, the daughter of Vice President Yemi Osinbajo, on Friday dismissed as false and wicked, a social media report naming her as owner of an ‘N800million’ property in highbrow Wuse II in Wuse District area of Abuja.

A blogger had accused Vice President Osinbajo of corruption, linking Kiki Osinbajo to a property worth N800 million in Wuse II.

But Kiki said on Instagram that she is only a tenant in the building where she runs a beauty business.

She described the social media report as unbelievable, and wondered how the writer, a “ grown man will sit in his home and lie about me; a grown man who possibly has children of my age!”

She said: “Like many young women in Nigeria, I work hard.

“It may be difficult for people like him to understand that a young woman can work hard and succeed on her own steam. Anyone can verify the ownership of the property of Glamd Africa at AGIS in Abuja. I am a tenant in the property. My landlord’s name is Musa Adams.”

The vice president himself had earlier written a petition to the Inspector-General of Police, Mr. Mohammed Adamu, against the same blogger who had accused him (Osinbajo) of corruption.

The blogger claimed that the suspended and detained Acting Chairman of the Economic and Financial Crimes Commission (EFCC), Mr. Ibrahim Magu gave the VP a bribe of N4billion from the N39billion Magu allegedly embezzled from the anti-corruption agency.

Osinbajo,through his lawyers, Bayo Osipitan and Co., had asked the police to investigate the allegations made by the blogger and if they prove to be false,criminal proceedings should be instituted against him pursuant to the provisions of Sections 391-395 of the Penal Code for Criminal Defamation against the blogger.

The Economy: What Nigerians should expect from Finance Act 2020, ...

BUHARI’S SUCCESS: WHO SHOULD CLAIM RESPONSIBILITY? By Martins Oloja

JIFORM calls for global action against restriction of migrants

No soldier killed in Abia, troops not on revenge mission –...