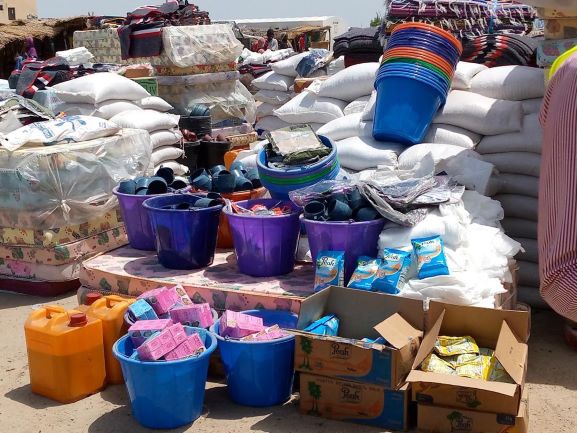 By Bode Olushegun
The National Emergency Management Agency (NEMA) has taken relief materials to Nigerian border town with Cameroon.
The federal government’s agency on Thursday took relief materials to Gamboru-Ngala, a Borno State local government with border with Cameroon following recent fire incident at a camp in the council.
A statement by the Information Office, NEMA Northeast Zonal Office, AbdulKadir Ibrahim on Thursday said: “Following a fire incident which occurred at international school IDP camp in Gamboru-Ngala local government area in April, Director General of NEMA, AVM Muhammadu Muhammed (rtd.) gave an approval for food and non food items for the affected victims.
“A team of officials of NEMA North East were in Ngala for the Distribution of the approved relief materials  at international school IDPs camp Gamboru-Ngala LGA of Borno State.
Also the agency has continued it’s monthly delivery of relief materials to internally displaced persons camps within Maiduguri.
The distribution of food is to about 230,000 internally displaced persons (IDPs) in the state capital, Maiduguri.
Varieties of food were distributed to the displaced persons in seven camps within Maiduguri and some parts of the state.
Speaking during the distribution at the Teachers Village Camp in Maiduguri, NEMA Team Leader, Food Distribution to IDPs camps in Borno State, Flight Lieutenant Umar Sani said the food would be distributed in 17 camps; which include seven official camps within Maiduguri, seven camps outside the state capital and three camps in liberated areas of Jakana, Mainok and Benesheik.
He said the items was part of federal government intervention to ease the hardship of IDPs displaced due to insurgency.
Sani noted that the agency has so far covered seven thousand four hundred households in Bakasi camp while four thousand one hundred households would be provided with foods items at Teachers Village camp.
According to him, each household will get 25kg of beans, 12.5kg of rice, 12.5kg of maize and condiment that will last for one month.
He said: “Every thirty days NEMA provide food items to displaced persons and every household gets in total 54.6kg of the items.”
He however urged the IDPs not to sell the items provided to them as government would not condone such negative practice.
Please follow and like us: