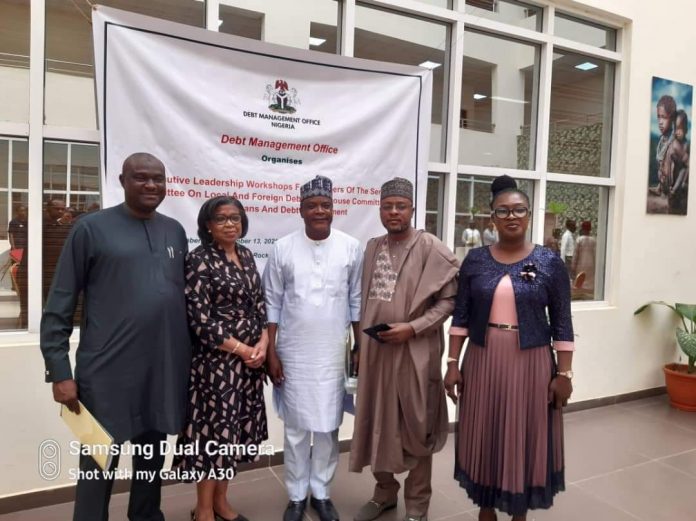 Although Nigeria has benefitted from increased borrowings through the cushioning of adverse economic impacts post-recession, there remains a vital need for an expansive growth in the country’s revenue generation, according to the Director General, Debt Management Office, DMO, Ms Patience Oniha.

The DG made this remark at a workshop on Executive Leadership for the Senate Committee on Local and Foreign Debts and the House Committee on Aids, Loans and Debt Management in Abuja on Monday, November 29, 2021.

While highlighting the need for the Workshop at this period, Oniha explained the stringency employed by the DMO in the management of public debt at both national and sub-national levels in compliance with the Debt Management Office Establishment (Etc.) Act, 2003, the Fiscal Responsibility Act, 2007 and the resolutions of the National Assembly where provided.

To this effect, she said that the DMO had made significant strides in meeting the government’s financing requests, expanding the domestic capital market and enabling access into the International Capital Market for Nigerian corporations.

It is with great pleasure and honour that I welcome the Chairmen and Vice-Chairmen of the Senate Committee on Local and Foreign Debts and House Committee on Aids, Loans and Debt Management and their respective members. I also welcome members of the media who are here, not only to cover the event, but to use the information gathered to further enlighten the public on the issue of public debt.

To provide some context to today’s Workshop, permit me to start by going back to history. The Debt Management Office (DMO) was established under the Debt Management Office Establishment (ETC) Act, 2003 and started operations in the year 2000. Prior to its establishment, public debt was managed by multiple MDAs which ultimately led to debt becoming a burden as under that system, it was difficult to determine the size of the Public Debt and Debt Service requirements for each year. Thus, it can be said that the DMO is a child of necessity.

Against this background, one of the DMO’s core mandate is to maintain a database of the public debt and publish same. Others include to advise the Government on public debt and raise funds for the Government. I am pleased to report that the DMO has not only carried out these responsibilities credibly, it has extended its scope to supporting the sub-national governments. Thus, the Public Debt Data for the Federal Government, the thirty-six (36) State Governments and the Federal Capital Territory are published quarterly; debt is serviced as and when due year after year. The DMO has raised Funds for New Borrowings in the Appropriation Acts to meet the Government’s financing needs and has been responsible for financing over 90 percent of the deficits in the Annual Appropriation Acts.

Another very important role which the DMO has played through its borrowing operations is the development of the domestic fixed income securities markets. Closely related to this is the access which it has created for Nigerian corporates in the International Capital Market. These have been achieved through various products: Nigerian Treasury Bills, FGN Bonds, FGN Savings Bond, Sukuk, Green 2 Bonds, Eurobonds and a Diaspora Bond. In this important developmental role, the DMO has won a number of awards locally and international from credible organisations.

The DMO has achieved all these with the support of its stakeholders. One of such stakeholders the DMO has to work closely with in its borrowings due to the various provisions in the DMO Act and the Fiscal Responsibility Act, 2007, is the National Assembly. It is for this purpose that this Workshop has been organised. The DMO has worked very closely, almost as partners, with the National Assembly for the public good.

This Workshop is holding at a most auspicious time, when public debt has become very topical in the local and international environments. Phrases such as debt transparency, fiscal deficit, debt burden, debt trap, default, etc., have become the subject of analysis and media write-ups almost on a daily basis. The DMO recognises that borrowing should be done with caution to meet developmental and sometimes, social needs, and that proceeds are deployed judiciously. In addition to this position, New Borrowings are undertaken in compliance with legislations and public debt is managed in accordance with international best practice. In the case of the later, the DMO undertakes an annual Debt Sustainability Analysis and is guided by a Medium-Term Debt Management Strategy which is prepared every four (4) years.

In closing, it is true that the public debt has been growing and expectedly, debt service. We should remember that Nigeria has witnessed economic shocks with major impact on Revenue that have resulted in recession twice and borrowing was a major tool for reversing the trends. However, going forward, there should be a strong emphasis on revenue generation from multiple sources to ensure that debt is sustainable. In addition, the initiatives that have been introduced to finance capital projects through Public-Private Partnerships, should be sustained to reduce the need for direct borrowing by the Government to fund infrastructure projects.

Thank you and I look forward to a mutually beneficial Workshop.