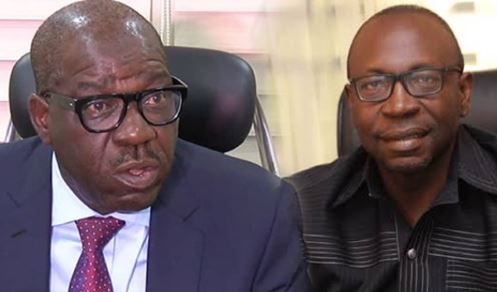 The Campaign Organization of Pastor Osagie Ize-Iyamu, the candidate of the All Progressives Congress (APC) for the Edo 2020 Governorship election, has challenged Governor Godwin Obaseki to confess to the amount of dollars he allegedly paid the PDP in exchange for the party’s ticket instead of distracting the people of Edo State with a screening of videos involving Governor Umar Ganduje of Kano State.

In a statement issued by the Director of Communication and Media, Mr John Mayaki, Governor Obaseki was also asked to reveal the amount of state funds he allegedly wasted on his ‘ill-thought and treacherous Oshiomhole-must-go’ project.

He said: It is unfortunate that Mr Godwin Obaseki, the outgoing Governor of Edo State, has continued in his irresponsible ways, chief of which includes the abuse of office and utilization of state purse and agencies to pursue personal ambitions.”

“In a desperate move to maintain relevance—as his name had been fast leaving the lips of Edo people, and his significance fading in their minds—he has compelled the state agency to display a disputed video involving Governor Umar Ganduje of Kano State.”

“This irresponsibility and desperation flout all the principles of decorum, decency, and honesty enshrined and expected of a gubernatorial personality. It shows, clearly, Obaseki’s lack of character and good spirit. As an aspirant seeking a second-term return, Obaseki further casts himself in the negative light with this thoughtless act.”

“Since his emergency cross-carpeting to the PDP, and his imposition as the party’s candidate, the party has been consumed by much ado, chagrin, wrangling, and bad blood.

“This is simply because of what both party members of the PDP and independent observers have said: Obaseki, in the usual PDP style, had rained dollars, hence buying the party’s candidature in the hands of taxpayers and at the expense of longtime aspirants.”

“The question is no longer if it happened as it has been corroborated by the best person to corroborate it: the precious Nyesom Wike of the loquacious and venomous order. The contemplation is now on the areas of the real amount expended and what part of public fund bore that brunt.”

“Instead of providing answers to this, and the amount of state funds he wasted on the Oshiomhole-must-go project he actively pursued for nearly two years at the detriment of governance in Edo State, Obaseki is seeking means to deflect attention from himself and distract the people with other inconsequential matters.”

“Offered with a platform such as a screen at the heart of Ring Road in Benin City, the State’s capital, one would have thought that the Governor would display his achievements and records in office to the people. That he settled to use such a platform for cheap blackmail reveals the failure of his tenure and the kind of campaign he intends to run.”