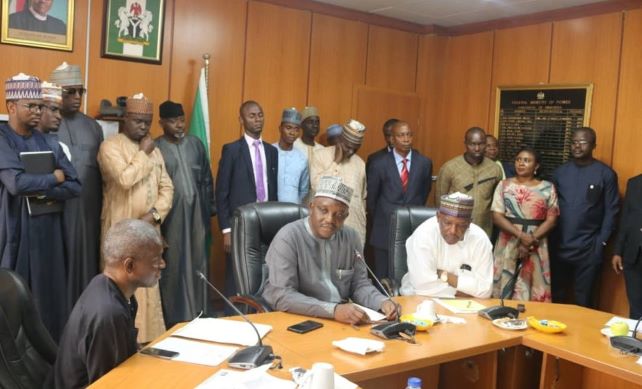 The donor-funded $1.6 billion power project, which is named TREP and designed to strengthen the capacity of the Transmission Company of Nigeria (TCN), is allegedly the source of fight between the Minister of Power, Sale Mamman and the sacked Managing Director of TCN,Usman Mohammed Gur.

The duo reportedly disagreed on modalities for the implementation of the project.

The controversy has now snowballed into a standoff as Mohammed Gur group commented on his sack. This development came amid threats by electricity workers to plunge the nation into a blackout if Gur was not reinstated.

Gur in a power sector chat posted as follows: “Like I always say; in a society like ours, anyone who work the way I did should expect sack everyday.

“So I have been expecting this since the day I assumed duty in February 2017. No surprises in what happened to me yesterday.

“The irony is while I was requested to assist in solving TCN lingering issues through a dignified engagement between Nigeria and AfDB in which it took me 6 months after PMB approval to take the assignment and I did best; I was sacked through press release without even a courtesy of informing me before it was announced.

“Yet I am grateful to PMB and those who participated in inviting me to serve Nigeria. I have no single regret or ill feeling because of the way it ended.” UG Mohammed

The minister, on the other, hosted the new management of the TCN led by Engineer Sule Ahmed Abdulazeez.

Checks also revealed that changes announced at the TCN were creating rumpus even within the Presidency as unconformed report hinted that the Minister did not secure authorisation for his action.

The Minister, it would be recalled, had in the past fired two Chief Executives only for the President to reverse the decision.

The project that created the current conttoversy is, however, at the heart of the administration’s efforts to revamp the power sector.

Interestingly, the donor and financiers also appeared to have an understanding with the Nigerian government that for accountability sake, a multilateral staff would be seconded to head the TCN.

Gur who was fired was seconded from World Bank/AFDB to head the TCN. While it was not clear if the appointment was tied to the financing of the project,the funding however came under the purview of Gur.

The Nigerian government facing power sector challenges from the privatisation exercise had set out to improve the quality and reliability of electricity supply, while striving to ensure the sustainability of the power sector.

Through TCN ,the administration intends to increase the wheeling capacity of its network through the expansion of existing substations, construction of additional lines and new substations, and to upgrade existing transmission lines through the replacement of their conductors with higher amperage ones.

The World Bank, African Development Bank (AfDB), Japan International Cooperation Agency (JICA) and French Development Agency(FDA) and other donor agencies raised a total of  USD 1.57 billion for the Transmission Company of Nigeria (TCN) to extend Nigeria’s electricity grid to 20,000 megawatts (MW) within the next four years.

The fund was raised for the company to implement its Transmission Rehabilitation and Expansion Programme (TREP).

TCN under the project was to steadily grow, and modernize Nigeria’s transmission network so it can take more electricity from generation companies (Gencos) to distribution networks.

The aim of the TREP also is to develop the grid to about 20,000 megawatts in the next three to four years, this being done via the implementation of the TREP.

As a donor funded project,TREP was virtually outside detailed ministerial control and oversight.

As there are project protocols already approved and with a donor seconded Chief Executive at the TCN, the first phase of the implementation started successfully, removing red tapism and bureaucratic hicupps.

This it was learnt did not go down well with political leaders within the system.

To start off, the African Development Bank (AfDB) in late 2019 approved $210Million NTEP -1 projects, which is under the Transmission Rehabilitation and Expansion Program( TREP) handled by the Transmission Company of Nigeria ( TCN).

The NTEP which was expected to be completed in two years and targeted at rehabilitating and expanding parts of the transmission grid in the North West, South-South and the South East.

According to a statement issued by TCN then, the project was to reconstruct old transmission lines and build new ones as well as construct new substations, contributing to further increase in TCN’s transmission capacity.

“The advert for the pre-qualification of contractors had been carried out under advance procurement and evaluation of submissions from consultants that submitted ‘Expression of interest’ for the procurement of consultancy for the project is on-going.

“Adopting the use of advance procurement in the execution of its projects, which has given TCN lead time, reducing procurement period by 6months,” the statement partly reads.

The Company further disclosed that the procurement processes for the project is about 70% complete, hence the speedy commencement of the project’s execution.

“NTEP-1 projects would address some transmission lines and substations requirements in the North West, South-South and South-East regions of the nation.

“The substations would all have turn in and turn out transmission lines.

“TCN noted that NTEP-2 which would execute projects mainly in the North East and parts of the central states of the nation is also in the pipeline and has reached an advanced stage on the funding processing,” the statement reads.

* Friction with the Minister

While the implementation was progressing,investigations showed that the relationship between the MD and the new Minister was deteriorating by the day.

Gur was reported to be unbending about the project implementation, a conduct reportedly interpreted by the Minister as insurbordination.

While the Minister allegedly accused Gur of uncooperative attitide, the former MD was reported to have vowed never to shift an nich on the project plan.

People close to the duo hinted that the relationship has been turbulent from day one after the Minister hosted the first maiden meeting with the Heads of agencies under the Ministry.

The situation was said to have been calmed down by the influence of the late Chief of Staff, Abba Kyari .

After the death of Kyari, the Minister reportedly became more assertive to exercise control over the TCN, a push resisted by Gur who has the backing of the donor community.

It learnt that the duo met on Monday at the instance of the Minister. While what was discussed at the meeting was not clear,it waa gathered the meeting ended on bad note,leading to the firing of Gur on Tuesday.

Reports indicated that the shake up at the TCN is causing uneasy within the donor community.

While some insiders affirmed that TREP will continue irrespective of who heads TCN,others expressed worries that further funding may be jeopardised over integrity issues in the implementation of the project