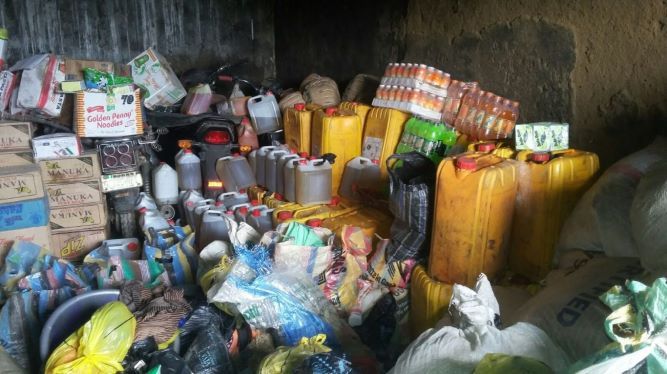 The Nigerian Army said it had destroyed six Boko Haram vehicles used in transporting food stuff and assorted provisions to hideouts of terrorists in Lake Chad region and Sambisa forest.

The Acting General Officer Commanding (GOC) 7 Division, Nigerian Army, Brig-Gen. Abdul Ibrahim, who supervised the symbolic destruction of the intercepted vehicles and materials, revealed to journalists in Maiduguri on Saturday that four persons were arrested when the vehicles were intercepted.

He said the destroyed vehicles were used in conveying food and logistics to the hideouts of the terrorist group.

Ibrahim said intelligence reports showed that the arrested suspects had indulged in supplying Boko Haram with logistics from Maiduguri.

“They have always transported food and logistics to the terrorist group in their enclaves in Sambisa Forest and Lake Chad region,” he said.

He listed the destroyed logistic supplies to include food stuff, assorted provisions and six vehicles.

“Despite the warnings, some of them still continued with the illicit and illegal business of supplying logistics and other materials to Boko Haram.” Ibrahim said.

He said the symbolic destruction of materials and logistics, would act as deterrents to those doing business with Boko Haram.