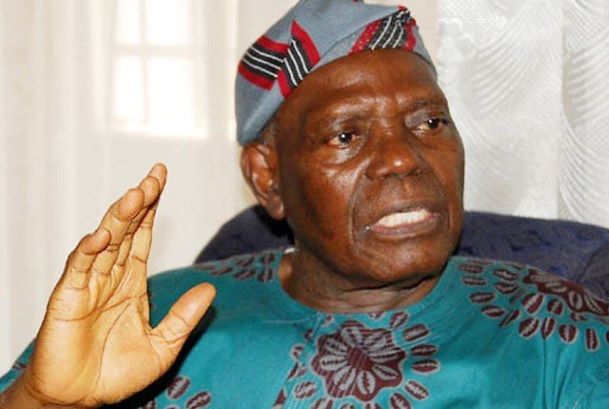 Bisi Akande, chairman of the All Progressives Congress (APC) reconciliation committee, says members of the party who are in court over matters that can be resolved internally are in error.

But Akande said rather than allow his committee do its work, some members are seeking judicial intervention.

The elder statesman said the actions of those going to court are harmful because of the manner in which court decisions are rendered.

“I have noticed with growing concern the increasing number of court cases being filed pertaining to disputes regarding the leadership of our party, the All Progressives Congress. Competition and different views on leadership are inherent in political parties. Thus, the fact that all party members do not agree on all things is not abnormal,” he said in a statement.

“Politics after all is, in significant degree, the art of resolving conflicts and disputes in a manner that strengthens institutions as well as relationships between the people who share those common institutions. The APC is a democratic body. This means we seek to resolve internal conflict through dialogue, deliberation and ultimately through open and transparent voting procedures. Consequently, I am a bit taken aback by the swift resort to the courts by some members who seek external decisions on what are intrinsically internal matters best determined by the deliberative process that is part and parcel of democratically-oriented party politics.

“I do not know the motivations behind this litigious conduct. It is not in my nature to ascribe negative or harmful motives to anyone. Those seeking access to the courts to decide what are basically politic questions perhaps think they are doing the right thing. If this is the case, I must state that they are innocently in error.

“Their actions are harmful to the party in compound ways. First, the subject matter they bring before the court is not amenable to judicial pronouncement… one side wins, the other loses, is not the best way to resolve political disputes. Again, such disputes are better treated by dialogue and the give-and-take that dialogue engenders. Courts do not proceed in such a manner. Second, to resort to the courts casts the party in a negative public light. Third, this penchant for litigation undermines party discipline, internal dispute resolution mechanisms and institutions.”

On the crisis between Adams Oshiomhole, national chairman of the party, and Godwin Obaseki, governor of Edo state, Akande said: “I must remind party members the party constitution requires that all internal dispute resolution measures be exhausted before a member carries a matter to court. I dare say this provision has not been honored either in spirit or in letter by those initiating these court cases seeking to oust party officials.

“More specifically, along with several other respected party members, I have been appointed as a member of the party’s special reconciliation committee. I have been given the further honor to be the committee chairman. This committee was the product of discussion and deliberation of party organs such as the NWC and NEC. No one has contended that this committee was improperly established.

“The committee mandate was to investigate and submit recommendations regarding the dispute in Edo state involving National Party Chairman Oshiomole and Governor Obaseki as well as inquire into disputes in other states that might weaken the party.”

The crisis rocking the ruling party had heightened after a federal high court in Abuja ordered suspension of Oshiomhole and the police took over the party secretariat.

The APC national chairman had accused a serving minister and some governors of being responsible for his ordeal.

Pictures and billboards of the embattled party chairman have been removed at the party’s secretariat in Abuja, while leaders of the south-south region of the party have asked the national executive council (NEC) to confirm Victor Giadom, acting national secretary, as acting national chairman.

The party will hold its NEC meeting this week.

ASUU decides next action as warning strike ends on Monday