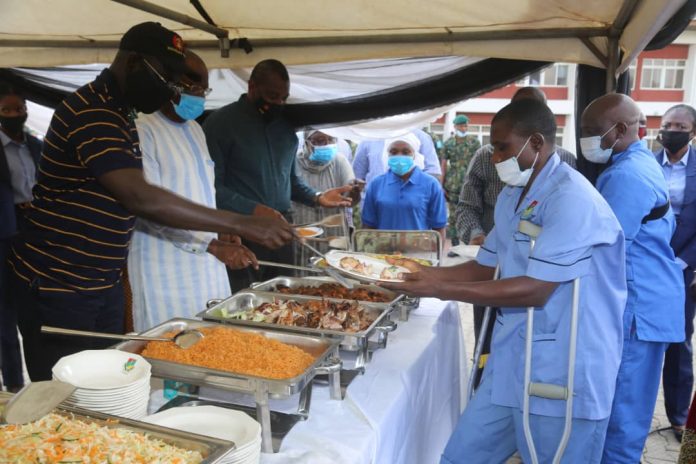 One of the soldiers wounded in recent battle with Boko Haram, Warrant Officer Yayaya Isyaku of Nigerian Army Artillery Corps has expressed his willingness to go back on the field with the terrorist group.

Isyaku, while speaking on behalf of other soldiers that were wounded in action at the north east theatre of operation during confrontations with Boko Haram and Islamic State West of Africa Province (ISWAP) terrorists, said he was delighted to see the Chief of Army Staff (COAS) and have him served him lunch at a sit out organized by the Chief Medical Director 44 Reference Hospital Kaduna.

The wounded warrant officer, who was one of those served by the COAS on Sunday at the Lunch in Kaduna, said this he and other wounded officers and soldiers were happy to be personally served by General Tukur Buratai.

He said: “We here in 44 Army Hospital are happy with everything here. The nurses and doctors are taking good care of us. The CMD is doing a motherly job here, she is taking care of us.

“We appreciate you sir, we are very grateful.”

Also speaking at the occasion was one of the patients also wounded in the battle with the terrorists, Major Daniel Dede, who said it was a rare privilege to see this day again where Chief of Army Staff is serving us meals of our choices.

He said: “Sir you went to the battlefield and served us meal there, we thought that was the end, but you still followed us here and served us meal. When we get well, we want to go back and continue to fight the terrorists. We pray God keeps you to accomplish your vision for our Army.”

Addressing the wounded soldiers, the COAS commended their gallantry, noting that the country appreciate their contributions.

He said the nation is praying for their recovering and would love to see them back on the battlefields.

Changing the narratives against Governor Obaseki, By Pius Alile