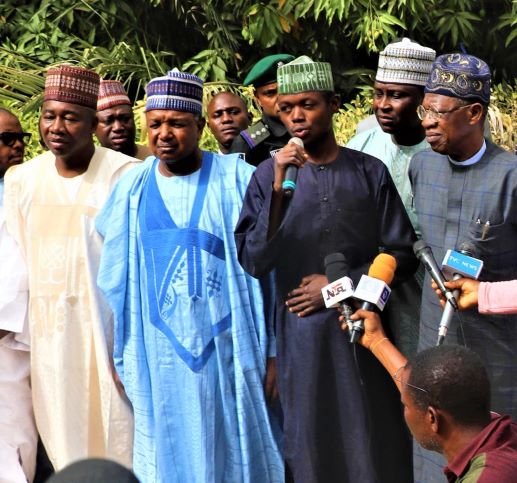 Mohammed Gunddare, the young man who rushed towards President Muhammadu Buhari at Argungu Fishing Festival in Kebbi state, said he was emotional about the president’s personality.

Security operatives had blocked the man from running into Buhari who had posed for photographs with some dignitaries at the event on Thursday.

The video of the incident went viral, with critics of the government suggesting thar the man had the intention of attacking Buhari.

Addressing journalists on Friday, Gunddare said his action was as a result of “emotional love for Buhari’s honesty and integrity.”

He discredited rumours doing the rounds  that he was tortured for his action, saying “the DSS never tortured me.”

The man said he did not think of the consequences of his action as he had always wanted to meet Buhari in person.

He said, “Yesterday was a different day to me because as a graduate of public administration who graduated with a second class lower. It took a lot of risk in an attempt to get the attention of Mr. President.

“Despite the fact that there was full security, I ran towards him. I am sorry for the disturbance I caused. It was emotional love for the person who has lived to have been the most integrity-nurtured, honest, incorruptible and right-driver.

“Everybody in Nigeria and beyond has never questioned the consistency, integrity, honesty and righteousness of Mr. President, on either national issue or even his own personal life.

“By all accounts, no single kobo has been messed up under the watch of Mr. President. From 2015 till date, no one ever questioned whether natural or material resources this country has was ever squandered even by one single Naira margin by Mr. President. This is the reason, prerequisites and values that carried my heart to Mr. President.

“Even if I was killed yesterday, I am telling you I achieved my ambition yesterday which is to meet Mr. President one on one, hair to hair. Emotional love can divert your thinking totally, and that was what happened yesterday.”

Atiku Bagudu, governor of Kebbi state, and Lai Mohammed, minister of information, were at the press briefing.

Holders Algeria stunned by Equatorial Guinea at Cup of Nations

The raid on Justice Odili’s house in Abuja and the Law...

I left Nigerian Army better than I met it, says Buratai