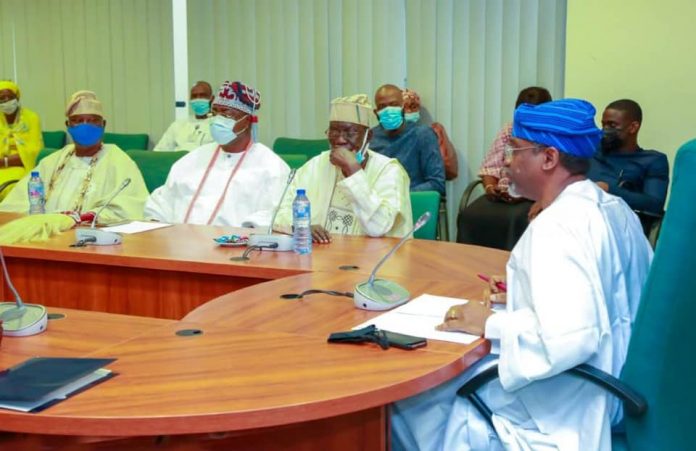 Speaker of the House of Representatives, Rep. Femi Gbajabiamila, has been hailed for attracting more federal infrastructure projects to Lagos State.

Traditional and political leaders from Epe Federal Constituency of Lagos State, who paid the Speaker a thank-you visit over the facilitation of the reconstruction and rehabilitation of Epe-Ketu-Itoikin express road in Lagos, said Gbajabiamila had made them proud.

Speaking during the visit on Thursday at the National Assembly, the Alara of Ilara-Epe, Lagos, Oba Ogunsanwo Olufolarin Kayode, and the leader of the delegation of Epe political leaders, Alhaji Seriki Bamu, extolled the exemplary leadership of the Speaker.

The Alara of Ilara-Epe, Oba Ogunsanwo, said: “The Speaker has been very proactive, and he is a round peg in a round hole. We are very proud of you for the good things you’ve been doing. That road has suffered a lot of neglect for close to 20 years.

“With your intervention, progress has been made, and we have come here to thank you for that. You have taken away the sorrows of our people as a dutiful leader. You have led by example by taking that project as your own constituency project.”

This is even as the Speaker said he was a leader to the 360 federal constituencies in the country, and that the House under him would ensure even distribution of projects across the country.

Gbajabiamila urged traditional rulers to continue to support and pray for their representatives so that they would perform better.

“This road project came about from having my ears to the ground. I said this is a road that we must not only begin to repair, but we must finish it by 2021.

“The project engineers are at 5km now, and by 2021, we must make sure that we complete the road. Like you know, my constituency goes beyond Surulere now.

“We are here to work and support you. Your prayers and support over the years have come a long way to getting us to where we are today. We have 24 members from Lagos, but we see ourselves as one Lagos. As you pray for me, please also pray for all of us,” he said.

On his part, a former Speaker of the Lagos State House of Assembly, Hon. Adeyemi Kuforiji, who hails from Epe, expressed appreciation to the Speaker for bringing succour to the people of Lagos and neighbouring states who are regular users of the federal road.

“We can’t thank the Speaker enough because that particular road was constructed during the time of Brigadier-General Mobolaji Johnson, while I was still in primary school. It has been in a bad state, and we are all happy this road is getting your attention at this time you are Speaker”

While praying for the Speaker to succeed in his tenure, the Aladeshonyin of Odo-Noforija Kingdom, Oba Ogunlaja Babatunde, prayed God to continuously protect, bless and grant Gbajabiamila the wisdom to pilot the affairs of the House.

Earlier while introducing the delegation, member representing Epe Federal Constituency, Rep. Wale Raji, had said the leaders were in the Speaker’s office to thank him for attracting the project to their community in Lagos.

In his votes of thanks, the Chairman, House Committee on Appropriation, Rep. Mukhtar Aliyu Betara, said the visit had shown that the leaders were with the Speaker, assuring that the committee would work on all projects nationwide.

Other members of the delegation were the Olu-Epe of Epe, Oba Sefiu Bamgbopa; Alaye of Odo-Noforija-Epe, Oba Babatunde Ogunlaja; Eljirin of Ejirin-Epe, Oba Rafiu Balogun; the Olowu of Owu-Ikosi, Oba Nelson Ogunlari, the Oloja of Epe was represented by the Odofin of Epe, Chief Oluwo; Alhaji Seriki Bamu, Rt.Hon Adeyemi Ikuforiji and Hon Wasiu Odeyemi.

FG to divest from 10 gas-powered NIPPs…N220.4bn privatisation proceeds to support...

Edo 2020: Catholic Church urges faithful with PVC to exercise their...