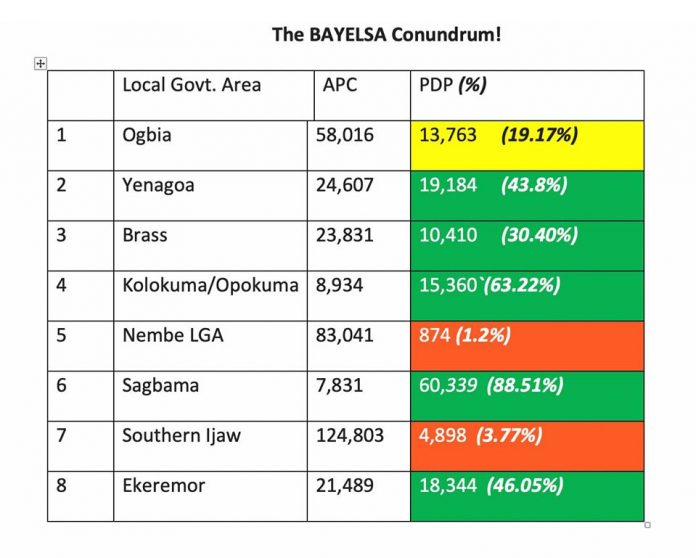 Bayelsa takes us back to the Landmark judgements of the 1979 Awolowo v. Shagari case. The Electoral Act and the Constitution prescribes _winning one quarter (25%) of the votes in two thirds (66.6%) of all the Local Govt areas of the state _

This brings the option of “THE DOCTRINE OF SUBSTANTIAL COMPLIANCE”
In 1979, Shagari’s lawyer, Chief Richard Akinjide, SAN, came up with 12 two third as the two thirds of 19 states – with the 13th state divided into three and votes cast in two thirds of the state constituting the figure from whence came two thirds of votes said to have been secured by Shagari, earning him the constitutionally required votes. This was accepted by 6 of the 7 judges, with only Kayode Eso, JSC dissenting. Those who agreed with the “Arithmetic” of Akinjide (The doctrine of substantial Compliance) were Atanda Fatai Williams, Andrews Otutu Obaseki, Chike Idigbe, Mohammed Bello, Mohammed Uwais, and Ayo Irikefe.

OR
2. Since the Candidacy of APC’s David Lyon and his running mate was NULL and VOID, can the votes cast to them be legal valid votes when their candidacy was nullified? Since they were not ELIGIBLE to participate in the Election, can they EARN Votes? If their votes are Null, since their candidacy was null ab initio, then the NEW Total VOTES will be All Votes MINUS the Votes credited to APC’s David Lyon and his running mate. In that case, the PDP stands duly elected. Incontrovertibly.

Buhari opens up, says he was almost overwhelmed by insecurity in...