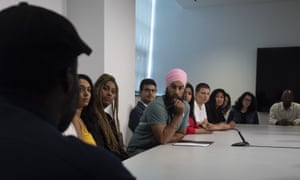 Scores of supporters rallied together in Edmonton, Alberta, last week, in solidarity with the family of an 11-year-old-boy who was racially profiled for wearing a durag at school.

On 12 September, Emmell Summerville, a sixth-grade student at Christ the King school, was asked to remove the durag because it “contravened school policy that states no caps, bandanas or hats are allowed in the school”.

But it’s not the request that’s truly appalling, it’s everything that happens after it. As the boy later described to his mother, Una Momolu, he was accused of being a gang member by a school resource officer, who suggested that the item of clothing connoted some kind of “affiliation” with gangs.

After a meeting at the school to discuss the incident got testy, the principal triggered a lockdown and called police, reporting that Momolu had been aggressive and was “screaming” during the 10-minute confrontation, causing concern for her safety and that of the students. Despite the fact that both an audio recording and Una’s recounting of the discussion prove this version of events to be completely false (there was no screaming or yelling, and Una sounds clearly distressed), she has been banned from school premises for a year.

Allow me to reiterate what happened here: An 11-year-old boy is criminalized because of a piece of clothing. The next day, his rightfully angry mother is not only dismissed in her concerns, but also made out to be a criminal.

Leaning into the tired ‘angry black woman’ trope, the boy’s mother was dismissed simply for standing up for her child

Sadly, none of this is new when it comes to racial politics in Canada. Young black men across the country have spoken for years about being surveilled and criminalized simply for existing. In 2015, writer and anti-racism advocate Desmond Cole wrote an award-winning essay about his experience with carding, the police practice of stopping civilians and collecting their personal information. At the time, Cole had been carded over 50 times. As of 2013 (before the practice saw a steep drop) black people were 17 times more likely to be carded in downtown Toronto than white people.

The gang reference in Emmell’s case was first made by the retired Edmonton police officer Rick Cole. Cole is a School Team Advisor for Youth (Stay) at Christ the King, and, according to the school’s Catholic board, he made the remark “in fear that the child could be mistaken for a gang member in the community”.

“The issue of race had no bearing on the actions taken and was NEVER part of the discussion,” the school board statement continued. And yet the irony that the comment came from someone who has worked in law enforcement is also not lost on me. Couching this kind of racism under the guise of disciplinary action creates a misconception that black kids are inherently unruly and criminal, even at school age.

The setting of this incident is also crucial to understanding the racial, cultural and social dynamics at play. Often, academic institutions are dwelling places for discrimination, harm and psychological violence, and Canada has a long history of systemic racism in its educational systems.

A 2017 report on the wellbeing of students in one of the greater Toronto area’s most diverse school districts found that black youth there struggled with low expectations from teachers and administrators, stereotypes about their commitment to school and intellectual abilities, as well as far more severe discipline compared to their white peers (42% of all black students have been suspended at least once by the time they finish high school).

It has become increasingly clear that in many cases black children are held back, singled out and disproportionately punished because they are black. And in one of the most appalling manifestations of this issue, the report also revealed what many who have passed through the system long suspected – that black students are routinely diverted into academic courses well below their ability.

In this case the school chose to respond in ways that were both troubling and telling. Leaning into the tired “angry black woman” trope, the boy’s mother was dismissed simply for standing up for her child. Would a white woman’s upset trigger a lockdown, police intervention and a one-year ban from her child’s school? Doubt it.

As of this writing, the school has “apologized” for using the word “gang” in reference to Emmell, but continues to keep the ban on his mother in place.

In North America, our general understandings of destructive racial dynamics are typically mapped on to the US, where anti-blackness often appears to be more visible. I’m thinking of young men like Trayvon Martin and Tamir Rice, who were taken from their families well before their time, because of society’s irrational fear of black boys. And the distinctiveness of these cases creates what lawyer and racial justice advocate Anthony Morgan calls a “Canadian racial exceptionalism”, the idea that Canada is somehow removed from the racial “messiness” that our neighbors down south are notorious for.

In truth, Canada also has a whole lot to reckon with when it comes to the way it treats black people. And one thing that cannot be denied is the fact that racism, particularly anti-blackness, not only lives here, it thrives.

Emmell Summerville has yet to return to school.

Why human penises are shrinking, by scientist