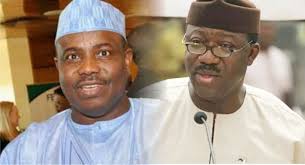 Governor Aminu Tambuwal of Sokoto State will lead the Nigerian Governor’s Forum (NGF) delegation to the United States for a meeting facilitated by the Aliko Dangote Foundation in concert with the Bill & Melinda Gates Foundation.

This followed the denial of visa to Governor Kayode Fayemi of Ekiti State who was technically denied a visa by the United States Embassy.

Fayemi had cancelled the trip and caused a letter to be written to the governors, notifying them of the cancellation when he was denied visa by the US embassy in Abuja. A letter to that effect sent to one of the governors whose advanced team was already in a European country enroute USA was read to WazobiaReporters.

DAILY INDEPENDENT reports that Fayemi was among some prominent Nigerians placed on visa ban by the United States government over their roles in electoral violence and other issues.

Though the NGF had denied that the governor was denied the visa, a credible source at the US Embassy said the term “administrative process” is a polite way of saying someone is being denied a visa.