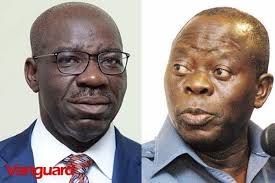 Justice A.A. Deemi-Ajayi of the Federal High Court, Benin City, Edo state has declined to grant an order restraining the state All Progressives Congress (APC) chairman, Col. David Imuse (rtd) from parading himself as chairman of the party.

The judge ruled that the order is pending the determination of a suit brought before it adding that all motions relating to the matter should be presented in the next adjournment on December 10 for ruling on the suit marked FHC/B/CS/133/2019.

The suspended chairman of the state APC, Anselm Ojezua, and two others, had through their counsel Ken Mozia (SAN) approached the court to issue an order restraining the defendants; Col David Imuse (rtd), Lawrence Okah, from parading themselves as state chairman and secretary of the party, respectively.

Eleven of the 16-member of the State Working Committee had signed a removal notice on Ojezua as state chairman of the party.

A leadership meeting of the party also purportedly removed Okah as state secretary of the APC in Edo state.

The plaintiff counsel, Mozia argued that Ojezua remained the chairman of the party while Okah has been suspended as state secretary of the party.

According to the plaintiffs’ counsel: “the status quo as at 10/11/2019 with regard to chairmanship of the APC, should be maintained pending the hearing and determination of the case.

But Douglas Ogbakwa, the lead counsel to Imuse and Okah, in a motion of preliminary objection argued that the court does not have jurisdiction on the suspension of Ojezua.

AI says will not be deterred from speaking against human rights...

Proliferation of universities: ASUU calls on NASS to pass bill to...