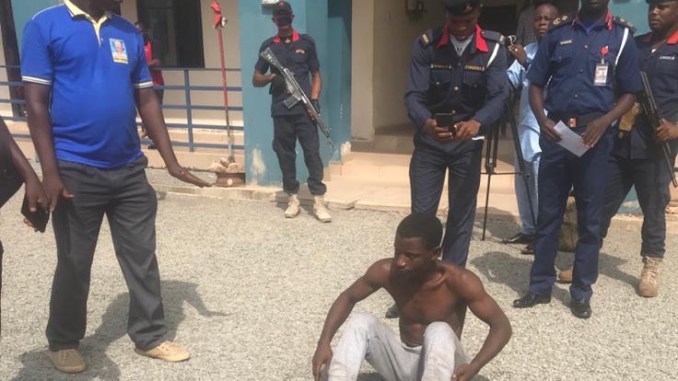 The personnel of the Nigerian Security and Civil Defence Corps (NSCDC), Nasarawa state command have arrested a man suspected of raping a three-month-old baby in Adogi, Lafia Local Government Area of Nasarawa state.

The deputy commandant of the NSCDC command in Lafia, Bisi Olugboyega told newsmen at a press briefing today (Wednesday, June 24).

The 27-year-old suspect named Ahmadu Yaro confessed to the defilement of Rakiya Aliyu during questioning by security agents.

According to him, he carried out the dastardly act for fun and not for ritual purpose.

The suspect testified that he had been involved in several sexual abuses especially against babies in that community.

Maimuna Adam, mother of the victim explained that the incident occurred in the midnight of May 27, when the family was asleep and the door to their room was left open due to heat being experienced in the area.

“The incident occurred on Wednesday 27 of last month when suddenly I woke up around 3am and found that my baby was missing. I checked my phone which was also close to me before I slept, but it was also missing,” the mother narrated.

Maimuna said soon after she realised that something was wrong with her infant daughter, she began to shout and people in the compound and others woke up to come to the aid of the family.

She explained that when both men and women of the village trooped into their compound, they went out in search of the baby on foot and motorcycles, and ultimately the child was found in an uncompleted building bleeding.

“She was found lying in the building with her pant kept aside. Everywhere across her private part was blood and then we rushed her to the hospital, “ she added.

AFEGBUA AS “ALAROKA”, MY RESPONSE, BY KASSIM AFEGBUA

How to avert another civil war in Nigeria, By Dele Momodu

COVID-19: DisCos support move to give free electricity to consumers