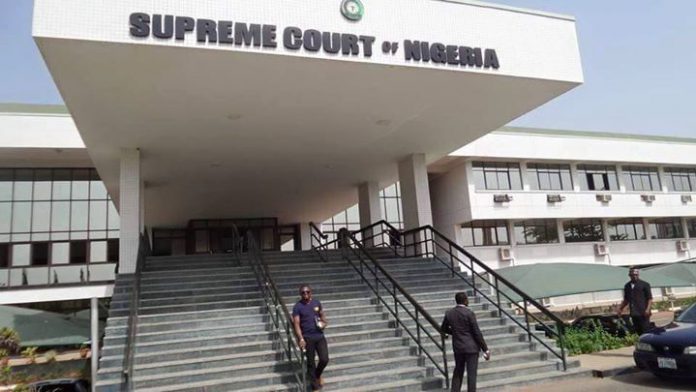 The Supreme Court has affirmed the constitutionality of virtual court sittings in the country.
The apex court gave the historic verdict in a suit filed by This was declared by the apex court on Tuesday the Ekiti State Attirney General and Commissioner of Justice.
The court struck out the suit challenging the validity and constitutionality of the virtual court sittings procedure for being speculative in nature without any valid cause of action.
A seven-member panel of the Supreme Court, led by Justice Bode Rhodes-Vivour, ruled that virtual court sittings procedure are constitutional.
The court’s decision came  after the withdrawal of the suits filed against the Attorney General of the Federation and Minister of Justice and the National Assembly.
The apex court admonished judges who refused to sit via virtual proceedings, pointing at administrative sanctions.
The apex court specifically directed that such judges should be reported to the National Judicial Council (NJC) for disciplinary action.
Please follow and like us:

Panic, again, in University of Abuja as another Economics lecturer is...

An administration and its silver linings, By Ikechukwu Amaechi

Senate to meet Buhari over insecurity

CBN MPC votes to reduce MPR by 100 basis points from...

FG bans another batch of Nigerians from traveling over breach of...