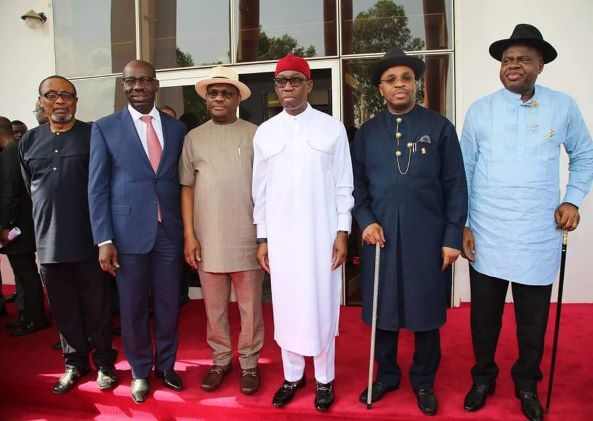 It deplored, with great concern, the crisis rocking the commission and said that it was convinced and expecting that the audit would serve to put the NDDC on a sound corporate governance footing and reposition it to better deliver on its mandate.

In a statement by Chairman of the Forum and Governor of Delta, Senator (Dr) Ifeanyi Okowa, the governors also gave full backing to the ongoing investigation of the commission by the Senate.

According to it, “we believe the Senate is operating within its oversight functions through the ad hoc committee set up for that purpose.

“It behoves us to respect the Senate oversight function and allow it to discharge this responsibility in a fair, transparent and equitable manner.

“The South-South Governors are desirous to see an NDDC that is fully alive and responsive to its mandate of accelerating infrastructural development of the Niger Delta region and enhancing the general living conditions of our people. Hence, we will not hesitate to give our unqualified support to any policy initiative that will make this a reality.”

The Forum advised the combatants in the current crisis in the NDDC to refrain from utterances and actions that would breach the peace and security of the region.

It vehemently condemned the attempted abduction of Ms Joi Nunieh, the immediate past Acting Managing Director of the Commission, in the early hours of Thursday, saying it was unwarranted, unnecessary and uncalled for.

The forum called on relevant security authorities to investigate the unfortunate development.

“Let it be on record that we are neither in support of nor against Ms Nunieh in the current cloud of controversy surrounding the NDDC.

“However, as responsible public servants and leaders in the Niger Delta, we are mindful of the implications her attempted abduction could have on the peace and security of the region, which the current administration has laboured to sustain in the last five years.

“We do not want that to be truncated as it can have adverse consequences on the national economy.

“We urge the feuding parties in the NDDC to conduct themselves in a civil, orderly and lawful manner for the good of the region and the progress of the country.

“Democracy is about the rule of law; we have the courts and the various democratic institutions to deal with any grievances people may have without resorting to underhanded tactics and methods to intimidate and hound others.

“Finally, we wish to reiterate our stand that both the forensic audit and the Senate investigation should continue and be concluded with dispatch so that the NDDC can quickly return to its role of advancing and protecting the developmental aspirations our people.’’

Lagos, Delta 2023 guber “endorsements” of a kind, By Ehichioya Ezomon