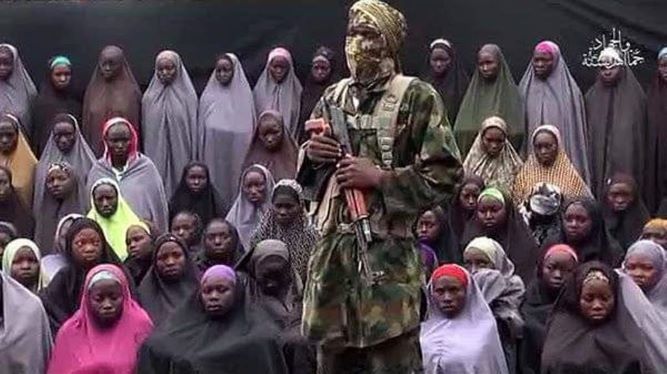 By Bode Olushegun
Six years after the 112 Chibok schoolgirls have remained in Boko Haram’s captivity, Borno Governor, Prof. Babagana Zulum has sent a delegation to comfort their parents.
Over 200 schoolgirls were abducted in Chibok six years ago with about a half of them later released with no words heard about thectemainjng 112 abducted girls.
Borno State Governor, in a show of compassion to the parents on Tuesday, sent a delegation of commissioners and a lawmaker to Chibok to support the agonizing parents, whose 112 daughters marked their sixth year in captivity by Boko Haram on April 14, 2014.
A prayer session was also held for their release in Chibok.
Commissioners of education, women affairs, poverty alleviation and the member, representing Chibok at Borno assembly, delivered Governor Zulum’s message of empathy, hope and assurance; and also presented 500 bags of rice (25kg), 250 gallons of cooking oil and N5.6m cash as social support for parents of the 112 girls still held by Boko Haram.
A majority of the parents are subsistent farmers, whose productivity has been affected by their agony.
Boko Haram insurgents, had on April 14, 2014, attacked a Government Secondary School in Chibok and took away over 200 schoolgirls in hostels, who were to write west african secondary school certificate examination.
Rescue efforts and largely mediated negotiations between the Buhari administration and the insurgents has led to the release of 107 in batches of 1 in May 2016; 21 in October, 2016 and 82 in January 2017 respectively, leaving 112 still missing.
Borno’s commissioner for education, Alhaji Bello Ayuba, told parents and community members at Chibok, that being fathers of female children, President Muhammadu Buhari and Governor Zulum will never give up on the rescue of the remaining schoolgirls.
“Governor Zulum, has asked us to inform you that in all his meetings with President Buhari, the President has consistently showed concern and commitment to rescue of the missing girls. The President and the Governor are fathers, with daughters.
“They know how you feel and they share your pains. They will never give up on the rescue of our daughters. No sane parent will give up on a missing child. They are committed and by the grace of God, these girls will be rescued alive. The Governor sends his empathy, and as you all have seen in his activities and visits to Chibok, the Governor holds Chibok very dear to his heart. Let us remain hopeful and prayerful, while our leaders sustain their concerted efforts” Ayuba said.
Commissioner of Women Affairs, Zuwaira Gambo and that of poverty alleviation, Nuhu Clark, who hails from Chibok took turns to support and raise the spirits of the parents.
Some of parents of the 112 missing schoolgirls have lauded Borno Governor, Professor Babagana Umara Zulum for his compassion towards them.
Yakubu Keke, who spoke on their behalf, said Zulum’s interest in the development of Chibok and the rest of Borno is clear to everyone.
He said the parents are grateful to the Governor, for his show of concern, urging him and the President to remain determined in trying to rescue the missing girls.
Please follow and like us:

How I lost 2 pregnancies in SARS custody, teacher tells Lagos...

Definitive Case Against Pantami’s FUTO Fraudfessorship, By Farooq A. Kperogi