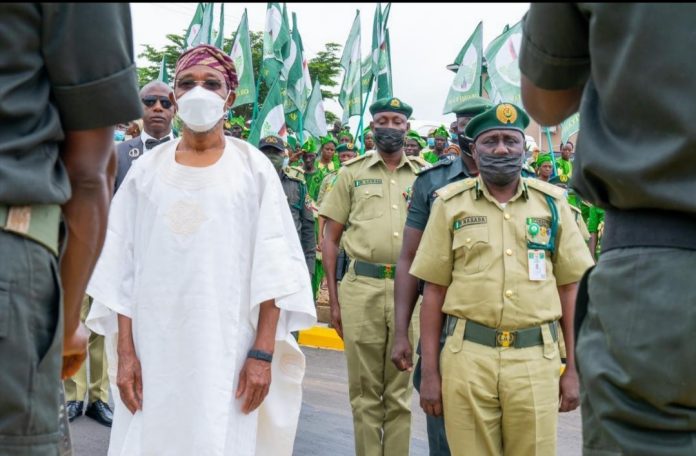 Federal Government has called for the cooperation of state governments in addressing the challenges of congestion in custodial facilities across the country.

The Minister of Interior, Ogbeni Rauf Adesoji Aregbesola, made this call at the commissioning of the Osun State Command office complex of the Nigerian Correctional Service, Osogbo on Friday.

Aregbesola in his address titled ”Unmatched Infrastructure Development”, stated that “the entire national custodial facilities have a maximum capacity for 57,278 inmates. But by the last count earlier in the week, there is a total population of 68,747 inmates, made up of 67,422 males and 1,325 females. We have therefore shot above the capacity by 18 percent.”

He informed that 50,992 inmates, representing 74 per cent of the total population of inmates in the custodial centres are awaiting trial while only 17,755 inmates which is 26 percent are actual convicts.

Bringing to the fore the reality of the limitations in the effective management of the criminal justice administration, he urged state governments to work with the federal government in addressing this challenge as an overwhelming majority of inmates in custody are state offenders being tried by their respective states.

Aregbesola, who espoused on the various measures undertaken by the government of President Muhammadu Buhari aimed at decongesting custodial facilities, urged state governments to do three things such as accelerate the wheel of justice as a lot of inmates have been in custody for a period longer than the maximum sentence their alleged offences carry. This fundamentally is a miscarriage of justice, he said.

He urged the state governments to “Share in the burden of decongesting custodial facilities by building modern holding centres, setting aside a sum for the maintenance of inmates, while the service will provide the personnel to man and run the facilities efficiently.

He also advised governors “to summon the will to do the needful on death row convicts and bring closure to their cases; set some others free on compassionate ground, especially those who have grown old on account of the long time in custody, those who are terminally ill and those who have been reformed and demonstrated exceptionally good behaviour; and commute others’ sentences to life or a specific terms in jail, informing that there are presently 3,008 condemned criminals consisting of 2,952 males and 56 females,” he added.

Aregbesola commended the Controller General Haliru Nababa, officers and men of the NCoS for their service in realising the mandate of keeping convicts and awaiting trial suspects in safe and legal custody and reforming convicts to be better citizens.

The minister thanked President Muhammadu Buhari for his generous disposition towards the ministry of interior and the four agencies under it while appreciating the Government and the good people of the State of Osun for freely donating the land and various assistance to the NCOS.

The Governor of the State of Osun, represented by the Secretary to the Government, Prince Oyebamiji Oluwole, commended the federal government and the NCoS for providing a conducive environment for the staff adding that it will encourage and boast staff moral in effective service delivery, stating the State’s government’s support to the NCoS.

The Speaker of the Osun State House of Assembly, Rt Hon Timothy Owoeye, in his goodwill message, commended Ogbeni Aregbesola for his passion for infrastrucrure development in the state, urged him not to relent in his efforts.

Earlier in his welcome remarks, the Controller General of NCoS, Haliru Nababa, who expressed the service’s appreciation to members of National Assembly for their commitments to equipping the service for optimal performance, assured that the NCoS will justify the federal government gesture.