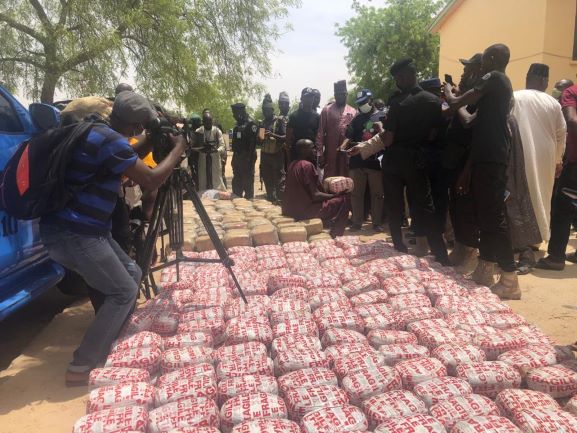 By Body Olushegun
The Police on Saturday paraded 71 people arrested for armed robbery, kidnapping, culpable homicide, and rape, among other crimes, in Borno State
Parading the suspects in Maiduguri, the  Borno State Commissioner of Poĺice, Mohammed Aliyu said the suspects were nabbed in separate operations by the intelligence unit of the Command since the beginning of the year.
The CP, who was represented by the Police Public Relations Officer, Edet Okon at the parade, said: “Sometime in March, 2020 at night time, a group of armed men invaded the house of one Bukar Alhaji at Sokotouku village, Biu LGA in an attempt to kidnap him.
“When he resisted, he was shot death by the Kidnappers who immediately fled the scene.
” Two of the assailants were later traced and arrested in collaboration with the Biu local hunters. Suspects include Musa Modu of Sokotouku village, Abubakar Ibrahim Birmu Bush in Biu LGA.
“Exhibits recovered  from them are three cutlasses and three handsets.”
He added that: “0n 07/04/2020, one Mallam Mohameed Sani of Murna Village, Yobe State was arrested in Askira/Uba for the Kidnap of one Dija Sajo and one Aishatu Buba.
“The criminal would later murder Dija Sajo before police, in collaboration with local hunters intervened to rescue Aishatu after a gun duel with the kidnappers.
“Efforts are ongoing to arrest four other accomplices which the suspect confessed to have partaken in the kidnap.”
The CP also said between 11/3/2020 and 2/5/2020, the some suspects were arrested for the kidnap of One Mallam and one Buba (their surnames remain unknown) at Nungu village in Askira/Uba local government area.
He said their arrest was achieved by the police in collaboration with local hunters following a tip-off, adding that N2 million was already collected from the victims.
He revealed that the suspects included Barka Mallam Bubba, Yahaya Njidda , Isa Ardo Ahmadu , all from Askira/ Uba council and  Jiji Wakili of Nafawa, Shani council.
He further said:” Based on a report on 8/4/2020 at about 0130hrs, some hoodlums, armed with assorted weapons invaded the house of one Musa Salisu at Nguma village and kidnapped his wife Ummi Musa to an unknown  destination; the police in Biu, working with local hunters swung into action with Binga Alhaji Yakubu and Sabe Ilu arrested.
“On 14/2/2020 one  Wabi Biri and Abdulrahaman Dagash were arrested by the Police working with local hunters at Uba axis following reliable information that they were responsible for the kidnap of one Umar Musa of Dille village  in Askira/Uba LGA.
“The hoodlums had already collected a ransom of one million naira (N1,000,000.00k) before their arrest.”
The CP said  at Burgu village in Shani council, police, in collaboration  with local hunters, arrested the under listed suspects for the kidnap of one Alhaji Dotti of Bargu village, adding  that the the unfortunate event occurred on 04/04/2020 at about 0200hrs.
“The suspects had already collected the sum of N3 million from the victims. Suspects are Alhaji Umaru Alhaji, and Maude Isa Hassan,” he stated.
He said the suspects who also included drug peddlers and rapists would soon be charged to court after thorough investigations.
Please follow and like us:

2023 Presidency: I will serve Nigeria if given the opportunity -Kalu

PROCEEDINGS OF THE NIGERIAN SENATE OF WEDNESDAY, 9TH JUNE, 2021

Ex-FIRS boss, Fowler, back to EFCC office for alleged diversion of...

Pastor in police net for allegedly killing a native doctor