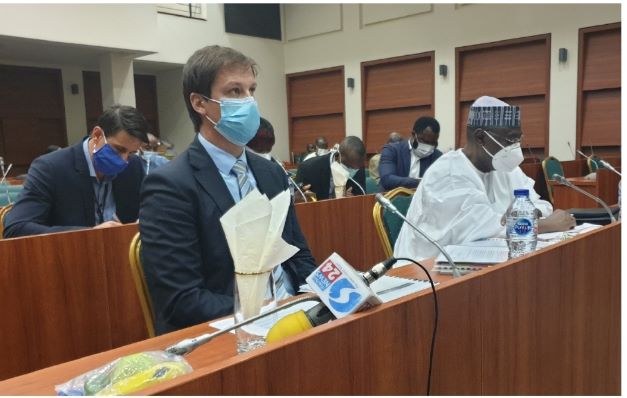 The Managing Director of Julius Berger Nigeria Plc, Dr. Lars Richcter said contracts for the 2nd Niger Brige, Abuja-Kano Road and Lagos-Shagamu Expressway projects awarded to the company followed due process.
Dr Richter made the assertion on Thursday at the National Assembly Abuja during a hearing by the House of Representatives Committee on Works investigating what the Chairman of the Committee, Honourable Abubakar Kabir Abubakar, described as the “the slow pace of work on the ongoing federal road projects”.
He emphatically denied a suggestion that Julius Berger did not get the contracts by due process.
According to him, Julius Berger lawfully bidded for the projects, after which the rest of the contract award process remained the statutory work and responsibility of the Ministry of Works to handle. Responding further on the issue of due process for the awards, Richter said the Bureau for Public Procurement (BPP) duly issued letters of No Objection for the projects as required by extant procurement law.
In response to the House Works Committee Chairman’s statement that the procurement process for projects in Nigeria is of three types, namely, Selective, Competitive and Direct procurement, Richter said: “We are an engineering contracting company, and as a going business concern, we reasonably bid for projects, but we are not by law part of the official procurement process that is the statutory duty of the Ministry.
He added: “It is the Ministry of Works that receives a Letter of No Objection to any contract; not our company. Bureau of Public Procurement (BPP) itself vets the rates contractors submit to the Ministry, and the Ministry again takes the rates vetted by the BPP to the Federal Executive Council for approval by the President in Council. Julius Berger is not at all entitled to a say in the process apart from the submission of our bid for a project with the Ministry. In the circumstance, I therefore cannot and did not say Julius Berger did not follw due process of award for the projects. We lawfully bidded for the jobs and were duly awarded the projects.”
Dr Richter gave assurance that the company is working assiduously within the schedules of panned works, and even working ahead of time in certain scheduled works.
Honourable Abubakar Kabir Abubakar in his opening remarks said the hearing was an enquiry into what procurement process Julius Berger went through for the award of the contracts for the projects; the cost each of the projects were awarded for; and completion periods at which the projects were contracted to be delivered.
A member of the Committee, Honourable Kaoje while acknowledging that Julius Berger is a renowned engineering construction contractor in Nigeria, said the Works Committee has legislative, appropriative as well as oversight functions over the prudent and successful execution of capital projects in the country.
Another member of the Committee, Honourable Johnson from Lagos State was also interested in the commencement and expected dates of completion and delivery for the three projects.
Julius Berger was asked to go back and put forward to the Committee a formally signed presentation to the Committee on the three projects, the subject matter of the hearing.
Please follow and like us:

Don’t be distracted from your studies, Buhari urges rescued students

Buhari commits to increase education budget by 50% in two years