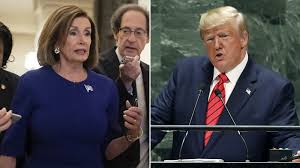 Nancy Pelosi,  the leader of the Democrats in the House, on Tuesday, announced a formal impeachment inquiry against President Donald Trump in the Congress.

The announcement marks the most direct step taken by the House Democratic Leader to embrace impeachment proceedings and is a significant escalation in the fight between House Democrats and the President.

“The actions of the Trump presidency revealed the dishonorable fact of the President’s betrayal of his oath of office, betrayal of our national security and betrayal of the integrity of our elections.

“Therefore, today, I am announcing the House of Representatives moving forward with an official impeachment inquiry,” Pelosi said at a news conference.

The House speaker has long pushed to keep her caucus away from the politically divisive issue and is signaling that she’s responding to the seismic shift among Democratic members, following Trump’s admission of discussing Vice President Joe Biden and his son in his phone call with the Ukrainian President.

Dozens of House Democrats — many from moderate or Trump-won districts — have announced their support for an impeachment inquiry over the past 48 hours.

In advance of that statement, Pelosi and Majority Leader, Steny Hoyer, also announced plans to vote on a resolution of disapproval on Wednesday for allegations “that the President of the United States sought to enlist a foreign government to interfere in our democratic process by investigating one of his political rivals — and may have used the withholding of Congressionally-appropriated foreign assistance days earlier as intimidation.”

Their statement did not mention impeachment.

Pelosi consulted Tuesday afternoon with the six House Democratic leaders to discuss their presentation to the caucus later in the day, Democratic sources familiar with the issue say.

In that closed-door meeting before her public announcement, Pelosi said the six chairmen will continue to investigate under a powerful new umbrella of an impeachment inquiry.

One arrested in stabbing attempt on Mali’s interim President

WHO launches first ever global report on Infection Prevention and Control

Ukraine steps up pleas for warplanes and other military aid