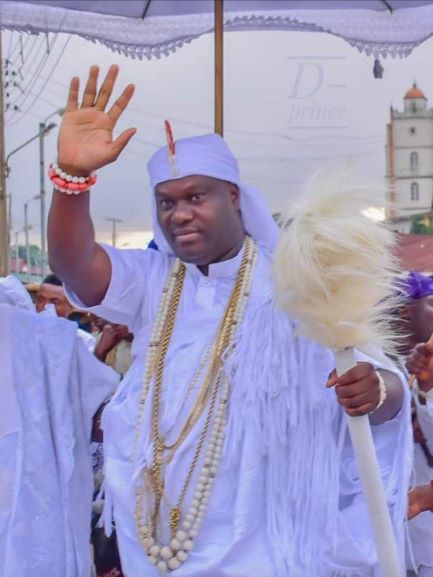 This they said will give legal backings to their responsibilities especially in the securing their domains.

The governors were among notable stakeholders who took part in the fourth edition of the Ooni Ogunwusi annual international leadership symposium 2021, in commemoration of the birthday anniversary of the Ooni of Ife, Ooni Adeyeye Enitan Ogunwusi Ojaja II.

The event which has the theme: “Addressing Security Challenges As They Affect Grassroots Development In Nigeria: Need for Constitutional Empowerment of Traditional Institution”, held at the prominent Oba Okunade Sijuwade Memorial Hall, Enuwa, Ile-Ife.

Represented by the Commissioner for Education, Hon. Folorunso Oladoyin, Governor Oyetola, who expressed huge concern about the current challenges confronting the country, revealed that much could be achieved by empowering the traditional rulers.

“As the closest to the people at the grassroots, traditional rulers are critical components of government. They also have the responsibility for ensuring security, governance and economic development in their abodes.

“This is important because as all politics is local, all security is also local. The criminals come from families, homes, villages and towns. To effectively secure our nation, therefore, requires that government should work with our traditional rulers as critical stakeholders in promoting active communal peace building, intelligence gathering, good neighborliness and responsible followership,” Governor Oyetola admonished.

On the other hand, Ondo state Governor who was represented by his Chief of Staff, Chief Olugbenga Ayinde, advised that outcome of the symposium should be compiled and transfered to the National Assembly for inclusion in the country’s constitution in line with the ongoing constitutional reform.

Akeredolu however asked salient questions which he said will determine the type of constitutional inclusiveness that should be given to traditional rulers.

He asked, “Will this entitle them to a share of the security vote?

“Will the present 5% allocated to traditional rulers be enough with the constitutional roles being assigned to them?

“Will they not be perceived as now being part of the government of the day?

“Will it not erode part of their institutional legitimacy and traditional authority?”

In the same vein, the Osun State Commissioner of Police, CP Olawale Olokode, described traditional rulers as a great partner in progress to the Nigeria Police, calling for a constitutional backing of their indispensable roles.

“In the 1999 constitution, there is no definite constitutional role for the traditional rulers. This is one of the defaults of the 1999 constitution. How do they operate without a constitutional resolution has seriously been undermined both in terms of authority and power. Their inability to intervene at the earlier stage of crisis has led to the escalation of such crisis leading to a serious instability, chaos and huge damage to lives, property and economic activities of the nation,” the commissioner stated.

Thete was the presentation of scholarship to indigent higher institution students by the Ooni of Ife as powered by Hopes Alive Initiative (HAI), under the leadership of Princess Temitope Adesegun.

The scholarship initiative was supported with N500,000 by the representative of the Governor, Folorunso Oladoyin, the Osun State Commissioner for Education.

Speaking on the involvement of the non governmental organisation, HAI, particularly in the education sector, Dr. Ese Oghene, while presenting the scholarship on behalf of Princess Temitope, said, “HAI understands the importance of education in the life of children and so HAI is currently working on operation ‘Send Every Child To School’, as a way of rewarding academic excellence. HAI offers scholarship to A-rated students one of which we just witnessed.”

The Ooni however thanked the organisers, including Sooko Kemade Elugbaju, Olamide Awosunle, Comrade Moses Olafare and Hopes Alive Initiative, for putting up the event despite the challenges during preparations.

“All I want to say is a very big thank you especially to all of you here present, you really made my day and I hold you all in a very high esteem. I really laud the speeches of Governor Oyetola, Governor Akeredolu and Osun State Commissioner of Police as they all addressed the security challenges being faced by all of us in this country. This is the time for all of us to come together and defeat this menace of insecurity so that we can progress as a country, Ooni Ogunwusi said.

How Dr Mailafia painfully died in the hands of doctors as foreign consultants looked on, By Isuwa Dogo (MBF)

No soldier killed in Abia, troops not on revenge mission –...