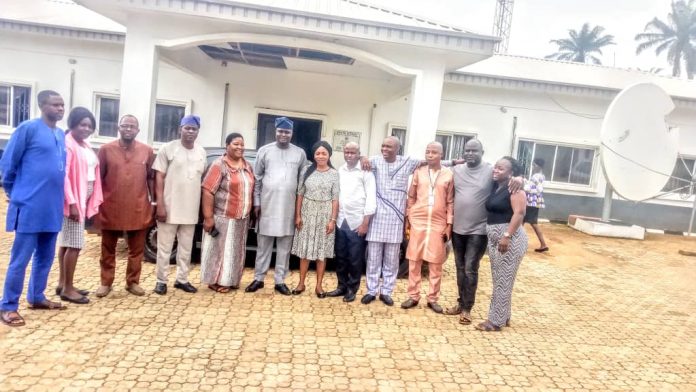 By Richard Akintade, Osogbo
The Chairman, Osun state Council of Nigerian Union of Journalists (NUJ), Comrade Wasiu Ajadosu, has reiterated that his administration would consult with the elders and ex-officio members in carrying out projects that have direct impacts on lives and welfare of members.
Comrade Ajadosu stated this during a thank-you visit to members of the Union at  Gold fm , Ilesa , following his victory at the just-concluded NUJ election in the state.
The NUJ Chairman stressed the need for a synergy among all members to move the union to an enviable height.
Earlier, the chairman, Gold fm chapel, Mr Abiodun Adeoye, called for resuscitation of the Nigerian Institute of Journalism (NIJ) in the  state council to make knowledge acquisition accessible for prospective members.
In a remark the immediate past Chairman’ of the chapel, Prince Isaac Haastrup tasked the newly-inaugurated executive members to leverage on the successes of the previous administration  and complete ongoing project before embarking on new ones.
The Acting Head of News and Current Affairs Department, Miss Folake Oye advised the team to operate an all-inclusive administration for a landmark progress.
On the entourage of the state Chairman of the NUJ were the Vice-Chairman, Sesan Adeleke, Secretary, Mr  Bukola  Elutadeji, SWAN Chairman, Tope Alabi, ex-officio member, Folake Longe.
Please follow and like us:

Soyinka distances self from agitators of Yoruba nation

Kaduna relaxes curfew in all 23 LGAs, permits movement from 6am...

Let us develop our youths, Ooni counsels, as Emir of Kano...