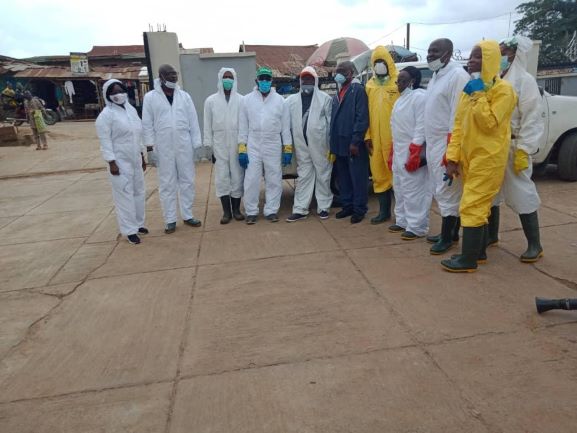 By Richard Akintade, Osogbo
The Osun State Government has embarked on decontamination exercise in all nooks and crannies of the state in order to prevent the spread of COVID-19 pandemic, as well as to ensure that its citizenry are in good health.
This was the assertion of the state Commissioner, Ministry of Environment and Sanitation, Hon. Sola Oladepo who is also the Chairman,l Decontamination Committee on Saturday during an on-the-spot assessment of churches, mosques, courts and banks in Osogbo, the State Capital.
Hon. Oladepo said the government took it upon itself to decontaminate public places because only strong and expensive chemicals as recommended by the World Health Organisation, which the private fumigators coil not afford, were used by the government for the process, saying this woukd assist in killing the virus, thereby limiting the spread.
He stated that since the commencement of the exercise, the decontamination team had fumigated and disinfected more than 1,800 public and private schools in the state.
He then advised the general public especially school teachers to complement government efforts  by  adhering strictly to the NCDC COVID-19 protocols through taking necessary precautionary measures such as good hygiene that would help to safeguard and protect the students from being harmed during the period they were in school.
Also speaking on the exercise, the Secretary of  Environmental Health officers in the State, Mr Femi Ola commended the State Government for involving qualified and registered Environmental Officers in the decontamination process, saying government had expended a lot to ensure that the exercise was thoroughly carried out.
In his comment, the Dadani of Osogbo Central Mosque, Alhaji Abdusalam Alayo, appreciated the government for its extremely kind gesture in combating the spread of COVID-19 pandemic in the State, while admonishing people to cultivate hygienic habit.
Places visited by the team on Saturday were: Redeemed Christian Church of God, Breakthrough Cathedral, Ogo-Oluwa Osogbo, Osogbo Central Mosque Oja Oba, High Court of Justice Okefia, Markets and Zenith Bank, among others.
Please follow and like us:

INEC releases `Report of the 2019 General Election’ with 180 recommendations