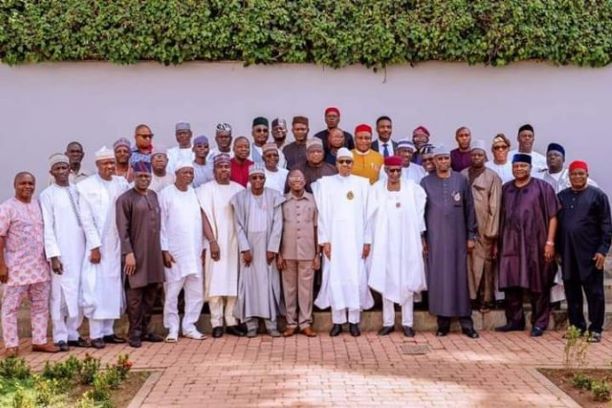 The Forum of All Progressives Congress (APC) State Chairmen has declared support for their National Chairman Adams Oshiomhole.

Executives of the forum rose from a meeting in Abuja on Monday l, March 9, 2020, and passed a vote of confidence in the former Edo State governor.

They said their position was to defend the sanctity of the constitution of the party with regards to upholding its supremacy.

Part of the communique reads:

“We have, therefore, resolved to ward-off all perceived and real threats by detractors and enemies of our great party to inhibit the implementation of democratic ethos as currently being championed by our indefatigable National Chairman, Comrade Adams Aliu Oshiomohle and which, has given sleepless nights to the opposition party.

“We observed that the issues presented before the two Federal High Courts that is tearing our party apart are political. Thus, we respectfully request all parties to seek political solutions. We urge all parties to return back to the dispute resolution and reconciliation Committee set up by our leader, President Muhammadu Buhari and led by our founding National Chairman, H.E. Bisi Akande.

“The State Chairmen being members of NEC and critical stakeholders of our party, dissociate ourselves from the ongoing brigandage intended to disorganize the peace we have been enjoying in the party. These acts, if successful, would only weaken the political strength of our great party.

“We the State Chairmen frown at the level of impunity being experienced in our great party in which, unauthorized individuals will issue press statements using the name of our party to deceive the leaders of the party and the unsuspecting public, thereby causing disaffection among the party leadership. All individuals involved in this practice should be mindful that their conduct is prohibited under the relevant sections of our party Constitution.

“We, the State Chairmen, unequivocally state that the party is bigger than the inordinate ambition of any individual and as such, we will not tolerate any unlawful step(s) by those igniting crisis in our party.

“As leaders of our party at the grassroots levels, we are more concerned with a lack of rewards for our party faithful, especially women and youths who worked tirelessly to enthrone this government.

“We urge those bent on destabilising our party to channel their efforts to giving appointments and other forms of empowerment to our party faithful.”