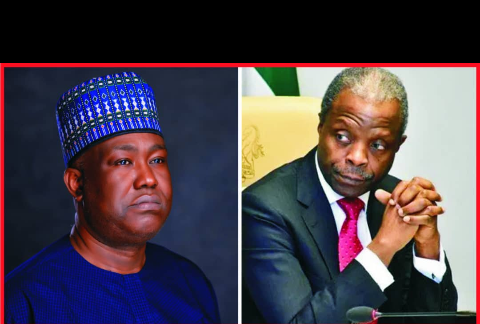 ▪Urges FG to leave CBN alone to do its job

A candidate in the 2019 presidential poll, Mr Gbenga Olawepo-Hashim, has cautioned against the continued devaluation of the Naira against the US Dollar.

He spoke in response to the position Vice-president Yemi Osinbajo canvassed on the issue.

Osinbajo had reportedly said that the Naira exchange rate was artificially low, a position that was interpreted to mean that he was calling for naira devaluation.

Although he has clarified his position, it continues to draw criticisms.

Read the full statement by Olawepo-Hashim in response below:

WE CANNOT CONTINUE TO DEVALUE THE NAIRA

The Naira is obviously under attack, but yesterday’s call by the Vice President Yemi Oshibajo that the value of Naira be further adjusted to align with “market realities ” can only worsen things.

Even the market fundermentalists at the IMF are very cautious to push for further devaluation of the naira as well as other traditional policy cocktails of Brethenwoods financial institutions capable of worsening cost of living for Nigerians most of who are already desperately poor.

Since the introduction of the Structural Adjustment Programme in 1986 and the accompanying currency devaluation, we have since seen the naira moved from 1 US Dollar to 1Naira to 1US Dollar to 9 Naira up to now 1
US Dollar to 412 Naira at the official window.

In three and a half decades of the continuous devaluation of the naira, the economy has neither been diversified significantly nor has Nigeria become an investors haven.

If anything at all, the country has almost lost her manufacturing sector and is fast becoming a dumping ground for products that are not necessarily of better standards than goods produced in Nigeria.

This ugly situation was what we predicted 35 years ago as a matter of fact, yours truly and other patriotic forces organised the anti-SAP uprising in 1989 to discontinue the continous devaluation of the currency.

Economics is the science of Alternatives .There are a dozen options to stabilise the value of national currency rather than the usual shallow recourse to devaluation with the attendant inflation, negative effect on living condition of the pauperized masses of Nigerians.

Our learned Silk and Professor of Law over reached himself by speaking publicly on the value of the currency which is the exclusive turf of the Central Bank.

Government needs to manage the fiscal side of the economy properly and leave the CBN alone to do its lawful duty on monetary policy management.

Until we get to a point where we are ready to seriously consider available options opened on management of the National Economy, the CBN should be supported on its “Managed Float”.

The blessings of Olu of Warri and the flicker of fire...