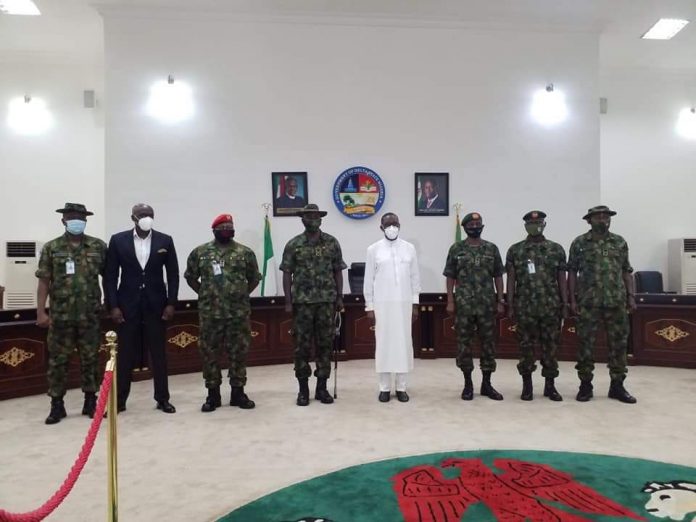 Governor Ifeanyi Okowa of Delta has pledged the state government’s continued partnership with the military and other security agencies to ensure peace and order in the state.

He charged the army to sustain the current peace and security in the Niger Delta, adding that the Delta Government had enjoyed a robust relationship with security agencies.

According to Okowa, the partnership between the state and security agencies has helped to ensure peace and security of life and property and has also made Delta investors’ destination.

“We are happy that sea piracy has reduced in Delta and we pledge the support of the South-South states to ensure protection of oil installations in the region.

“I assure you of our cooperation at all times because we have had very warm working relations with the division since inception.

“The military and other security agencies have worked quite a lot with us to ensure peace within the state. There is still a lot to be done but we have done quite a lot,” he said.

The governor commended the army formations for cooperating with other security agencies to ensure peace in Niger Delta.

“I appreciate your division, the brigade and other military formations for all your efforts in ensuring peace and security in the entire Niger Delta.

“Sea piracy is still there, but it has largely reduced in Delta and we will continue to work hard and provide the needed support because when there is a perfect working relationship, to support becomes easier.

“Information sharing is necessary to secure our state, and here in Delta, community conflicts are stepped into as quickly as possible because of the various peace mechanisms we have put in place.

“We have had a very good working relationship and we hope to continue in that direction,” he said.

The GOC said he was in Delta to familiarise himself with the government and people of the state.

He commended the governor for the tremendous support he had given to 63 Brigade as well as the level of peace and security in the state.

He said that the governor’s development and youth empowerment programmes had reduced crime and criminality in the state and lauded him for the infrastructure development across the three senatorial districts of the state.

He pledged his commitment to partner other security agencies to sustain the prevailing peace and security in the states within the division.

Christopher Plummer, actor of “The Sound of Music: fame, dies at...