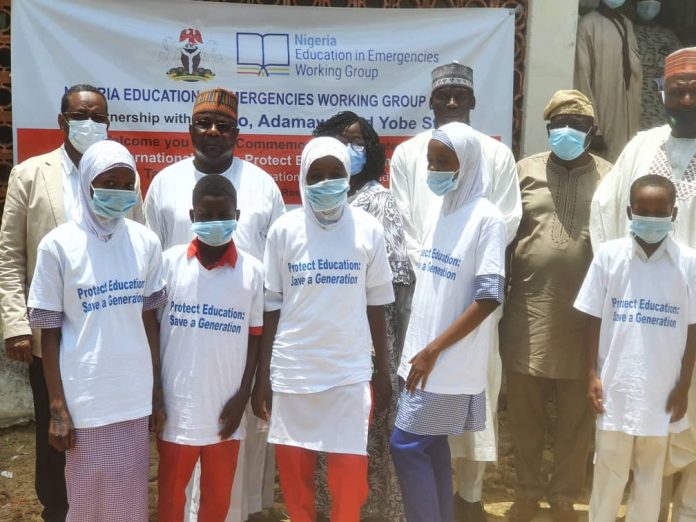 The Federal Government and the United Nations Children’s Fund (UNICEF) have expressed commitment to stopping all forms of attack on educational facilities in Nigeria.

The commitment to ending violence in schools is coming on the heels of the nation’s securing $20 million for accelerated emergencies funding for the North East from Global Partnership (GPE).

They both expressed their commitment at the maiden commemoration of International Day to Protect Education from Attack held in Maiduguri on Wednesday.

Speaking on the occasion for the Federal Government, the Permanent Secretary, Ministry of Education, Sonny Echono, said the government recognized access to quality education as a fundamental human right of every child; and had put in place many policies and programmes aimed at expanding access to quality education for all children irrespective of their religion, tribe or socioeconomic circumstances.

He said: “In spite of these, many Nigerian children are denied this fundamental right due to the incessant attacks on our educational facilities.”

He added that: “When school facilities are attacked, learners and teachers are abducted, killed or maimed, and schools are closed; millions of children are denied access to quality education.”

He lamented that: “This inhibits our national growth and development as a nation,” stressing that: “But we are committed to stopping all forms of attack on our educational facilities.

“This was why Nigeria endorsed the Safe School Declaration (SSD) as evidenced by the letter signed by Hon. Minister of Education, Adamu Adamu on 8th March, 2018.”

He noted that the $20 million accelerated emergencies funding for the North East would complement efforts of Borno State Government and what humanitarian partners are doing to providing quality education in emergencies to conflict- affected children in the region.

UNICEF urged government at all levels to prioritise the safeguarding of children and education institutions.

The international organisation, said armed conflict, occupation of schools by military, gender-based violence, lacked of gender-segregated latrines and sanitation facilities in schools will constitute an affront on the rights of children to education.

The UNICEF Chief of Field Office in Borno, Mr Maulid Warfa while commending the Foreign, Commonwealth and Development Office for its support for education programmes in North East Nigeria, lamented the impact of armed conflict on children living in the North East.

He lamented that children bear the brunt of neglect of the education sector the most.

Warfa said: “Any country that fails to protect children and their rights to education will eventually be covered in dark clouds. I know this because I had to flee from my village in my country when I was only seven years. I lived in a refugee camp almost throughout my teenage years.

Warfa further urged the state government to provide adequate water and sanitation facilities in schools ahead of school reopening.

According to him, protecting children from the COVID-19 pandemic highlights Nigeria’s commitment to the Safe School Declaration.

The Safe School Declaration is a political commitment endorsed by 104 countries to protect education and learners from attack.

In his address, the Borno State Governor, Prof. Babagana Zulum, said the state is building more classrooms to accommodate out-of-school children in the state.

Zulum, who was represented by the Commissioner for Education, Honourable Bello Ayuba, said the Ministry of Education and the State Universal Basic Education Board have been directed to launch programmes that will lead to the enrolment of out-of-school children.

“The state government appreciate the efforts of development partners, including the Education-in-Emergencies Working Group, UNICEF and Save the Children International for complementing the state government in providing qualitative education for our children.”

He said: “We are ready for the International Conference on Safe Schools scheduled for next year.”

Magu: Salami Panel Winds Up, Wants Police Out of EFCC