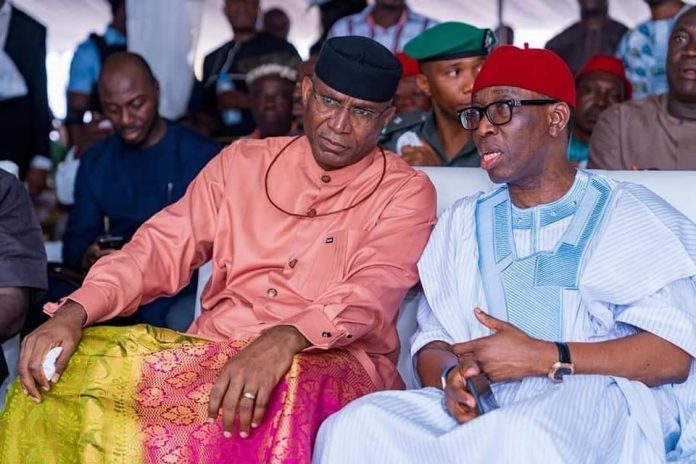 Delta Governor, Sen. (Dr) Ifeanyi Okowa, has congratulated the Deputy President of the Senate, Senator Ovie Omo-Agege, as he turns 57 on Monday.

Okowa said that Omo-Agege had made Deltans proud with his outstanding performance as one of the Senators with the most number of Bills in the 9th Assembly.

In a statement by his Chief Press Secretary, Olisa Ifeajika, in Asaba, the governor said that Omo-Agege, who represents Delta Central Senatorial District, remained an amiable and very illustrious son of the state in whom Deltans are extremely delighted about for his sterling and audacious political accomplishments.

“On behalf of my family, the government and people of Delta, I congratulate my brother and friend, the Deputy President of the Senate, an illustrious son of Delta and a leader of inestimable value, Distinguished Senator Ovie Omo-Agege, on the occasion of his 57th birth anniversary.

“Your Excellency, you have made invaluable contributions to nation-building, especially with your no fewer than 18 Bills in the 9th Senate, including the recently-passed Sexual Harassment Bill which seeks to combat sexual harassment as part of a broader move to uphold ethics in the nation’s tertiary institutions.

“As a committed patriot, diligent and focused leader, Deltans and indeed, Nigerians, can attest to your unrelenting commitment to the fight against corruption in our institutions of government.

“You have also demonstrated a strong commitment to the welfare of our citizens with the number of persons you have touched their lives in many ways, including employment.

“On this special day of your 57th birth anniversary, it is my prayer, Distinguished Deputy President of the Senate, that God will grant you many more years in good health to use your good office to attract more developments to our state as we navigate towards bequeathing a Stronger Delta for our people,” he stated.