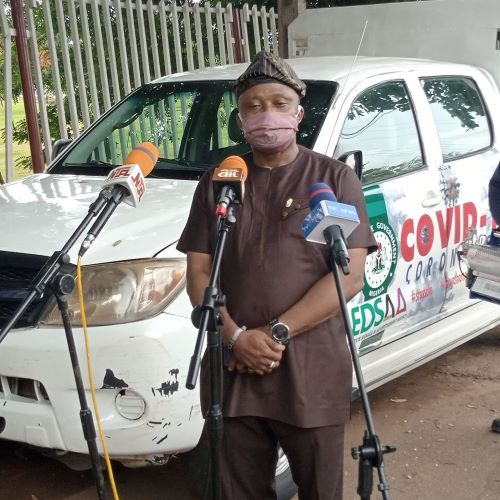 The Edo State Government has cleared and exited 5,067 suspected Coronavirus (COVID-19) cases across the state’s 18 local government areas (LGAs), who have completed the compulsory 14-day follow up and tested negative.
The Commissioner for Health, Dr. Patrick Okundia, who disclosed this to journalists in Benin City, said the cleared cases comprise 348 Persons of Interests (POI) and 4,719 others that had various degrees of contacts with confirmed cases.
According to him, “as part of revved up measures to contain the pandemic across all communities in the state, the government has intensified contact tracing of about 5,161 line listed contacts, who had varying degrees of contacts with confirmed cases.”
Okundia said Edo has so far recorded 2,300 confirmed cases, 10,850 suspected cases, 83 deaths and 1,842 discharged persons, reassuring that the Governor Godwin Obaseki-led government remains committed to containing the virus and protecting Edo people.
He further warned against submission of wrong information, including names, addresses and phone contacts, by residents during sample collection for laboratory testing, noting that it was threatening the government’s efforts at curtailing the spread of the virus.
The commissioner who identified early testing as essential in the government’s efforts to contain the pandemic, noted: “The Edo State Government encourages all residents with symptoms of the disease to come out for testing and treatment as early detection is key to containing the virus. When detected early, a patient’s chance for survival increases.
“We urge you to comply with all government directives, aimed at ensuring the health and safety of Edo people. While the government ramps up efforts to win the war against this common enemy of mankind, it is imperative that residents stay at home and observe social distancing guidelines and other precautionary measures against the spread of the disease, including regular hand washing with soap, under running water and the use of alcohol-based hand sanitisers. Cover your mouth and nose properly when sneezing and/or coughing.
“Two toll-free lines for COVID-19 response have been introduced by Edo State Government to strengthen the initial lines from the State Ministry of Health and the World Health Organisation (WHO) distributed at the outset of the outbreak. If you have any COVID-19 symptoms, please call 08001235111 or 08002200110 for assistance,” Okundia added.
Please follow and like us:

Obasanjo waxes prophetic at Fasoranti’s birthday, says “I have a vision...