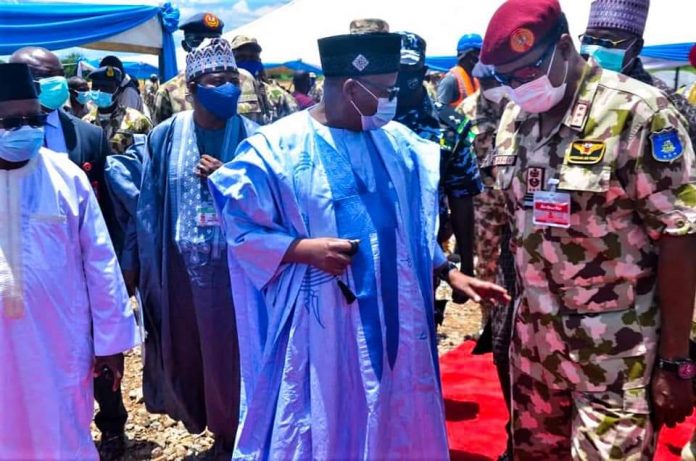 Nigerian Air Force (NAF) has commenced the construction of an aircraft maintenance hangar at the Special Operations Command (SOC), Bauchi.

Confirming the development, Director of Public Relations and Information of Nigerian Air Force, Air Commodore Ibikunle Daramola, said it was in continuation of its sustained efforts at tackling current and emerging security challenges in the Country, especially in the North East, North West and North Central parts of the Country.

He said sitting on a plot of land donated by the Bauchi State Government, straddling the NAF Base and the Sir Abubakar Tafawa Balewa International Airport (ATBIA), Bauchi, the aircraft maintenance hangar, when completed, would not only serve the NAF and the aviation industry nationwide but would also drastically reduce the timeframe for turnaround maintenance of NAF platforms, thereby improving the effectiveness and efficiency of Air Power employment in the fight against insurgency.

Speaking during the ground breaking ceremony at the project site, the guest of honour, the Governor of Bauchi State, Senator Bala Mohammed, while commending the Chief of Air Staff (CAS), Air Marshal Sadique Abubakar, for his exemplary, result-oriented leadership of the NAF, acknowledged the supreme sacrifice of service personnel, not only in ensuring the unified existence of the country but also in preserving the country’s nurtured democracy.

According to him, “the success and performance of the NAF is determined by how well its aircraft are maintained and sheltered. Therefore, it is indeed a good opportunity to be part of this epoch-making event as this aircraft maintenance hangar would serve as a store house and maintenance shelter for the precious platforms of the NAF and other aircraft that could be maintained at the hangar.”

The Governor further noted that Bauchi State would benefit both during and on completion of the project through employment opportunities for members of host communities.

He therefore thanked the Commander-in-Chief (C-in-C) of the Armed Forces of Nigeria, President Muhammadu Buhari, and members of the National Assembly for appropriating and approving funds for the building of the aircraft hangar in Bauchi.

“President Muhammadu Buhari has reiterated his commitment to continually support ongoing operations against Boko Haram, banditry and other forms of criminality in the country and to equip the military adequately to completely end the insurgency and overcome all other threats to Nigeria’s national security. The approval for the construction of this hangar is a testament of his promise”, he said.

While apologising for the failure of successive State administrations for not connecting the ATBIA to the National Grid, Governor Mohammed said his government would make every effort to ensure the airport was connected to the Grid as quickly as possible.

The CAS stated that the flag-off of the construction of the aircraft maintenance hangar would significantly add value to the NAF’s operations in the North East, North West and indeed the entire Country.

He added that the emplacement of the hangar would also ensure that the NAF engineers, technicians, aircraft and other equipment that were to be deployed in Bauchi would be protected from the vagaries of weather and thus operate in a conducive environment.

According to him, “By its strategic location, Bauchi provides our aircraft with the reach required to adequately respond and provide support to our troops fighting against insurgency/terrorism in the North East, banditry in the North West as well as other security challenges in North Central. I am optimistic that the construction of the aircraft maintenance hangar will add significant value to efforts at tackling the current and emerging security challenges in our Nation.

“This is because downtime for aircraft maintenance will not only be greatly reduced but precious flying time used to ferry aircraft to bases in the South will be preserved”, he said.

Speaking further, the CAS, while highlighting that the role of the SOC was very crucial to the NAF’s operations, as a deciding element in the fight against terrorism and banditry, noted that the establishment of the Command as well as the Helicopter Overhaul Centre and Special Operation Forces training in Bauchi were clear testimonies of the Federal Government’s commitment to ending insecurity in the North East and indeed the entire country.

He noted that the new facility would ensure a quick turnaround time for NAF aircraft to allow more hours for operations against terrorists as well as in support of other government efforts at providing security.

While pledging that the NAF would continue to work for the security and unity of the Nation, the CAS expressed gratitude to the C-in-C, President Muhammadu Buhari, for facilitating the approval of the budget to construct the hangar, despite competing economic demands, as well as for his continued support to the Service towards the achievement of its desired Air Power objectives.

He equally appreciated the Bauchi State Governor for the support enjoyed by the SOC from the Government and good people of the State.

Air Marshal Abubakar also commended the Air Officer Commanding (AOC) SOC as well as his officers and men for their hard work, dedication and sacrifices.

He urged them to continue to put in their best towards ensuring that Nigeria is safe and secured.

“Recall that in the drive to add value to our society and secure our communities, there is no finishing line”, he added.

The Air Officer Commanding Special Operations Command (AOC SOC), Air Vice Marshal Charles Ohwo, while thanking the CAS for his frequent visits as well as his continued commitment to the Command, stated that the proposed aircraft maintenance hangar would undoubtedly improve security response time in the Zone.

This, he said, was because some maintenance activities, which were currently carried out at NAF facilities in Kaduna, Port-Harcourt, Lagos and Enugu would, upon completion of the project, be carried out in Bauchi.

He noted that this would save vital time required to ferry aircraft to these locations and ultimately improve response time in the various theatres of conflict.

He highlighted that the project would also serve as an avenue for collaboration between the NAF and various higher institutions in Bauchi in the area of technology exchange and capacity building, thereby positively impacting the host community.

Highpoint of the event was the symbolic laying of the foundation blocks for the aircraft maintenance hangar by the governor, who was assisted by the CAS, Emir of Bauchi, His Royal Highness, Alhaji (Dr) Rilwanu Suleiman Adamu, as well as other dignitaries, including Bauchi State Government officials and senior military officers.

EcoParl gets passmark for milestones achievements