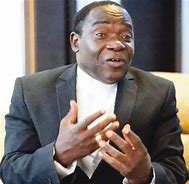 Buhari to UN President Muhammad-Bande: There’s heavy weight on you

From Kankara to Kagara, hypocrisy defines the Buhari government, By Ikechukwu...