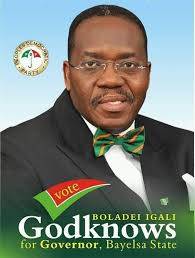 By its press release dated Tuesday, August 11 2020,the Independent National Electoral Commission (INEC) has given notice that the Bayelsa Central Senatorial re-run elections will hold on Saturday, October 31, 2020. This isa very welcomed and cheering development for which I join other Nigerians and Bayelsa Central Senatorial Districtcitizens to express profound gratitude to INEC.

The Bayelsa Central Senatorial Zonecomprises of three Local Governments namely; Kolokuma/Opokuma LGA, Yenegoa LGA, and Southern Ijaw LGA.Unknown to many, this is one of the most important and valuable electoral constituencies in the country. This is due to the fact that it is home to a preponderantportion of the country’s oil and gas resources; both onshore and offshore.

Other critical assets are; the large portion of the national Gas endowment of 186 trillion standard cubic feet and provides a one-third of all Gas supply to NLNG Bonny, through Shell’s GBARAN CPF – the largest gas plant in Nigeria. It is alsohome to both Bonga FPSO and Zabazaba Oil fields (the country’s most important Oil & Gas infrastructure, deep offshore).

In addition, it is also one of the zones with the largest share of the country’s coastline with great potentials for the development of marine economy especially deep-sea fishing and maritime transportation. It also serves the protection of our coastal strategic interest, being the most deltaic, most riverine, and most coastalpart of the country.  This constituency, especially my own Southern Ijaw Local Government, holds critical importance to the strategic interests of Nigeria’s peace andsecurity in the Gulf of Guinea.

Unfortunately, despite the importance of this area, large sections are bereft of government impact and not even connected by road. The paradox is that, after 60 years, these heavily oil producing areas can only be accessed by water transportation.

Having survived the high points of the difficult times of militancy,it is only properand indeed well deserving that this important part of the country is well represented by its “first best eleven”. This is in the best interest of its people which include the rich multi ethnic mix from across the country residing in the state capital, Yenagoa, the overall interest of Bayelsa State, the Ijaw ethnic nationality, and the overall good of the nation.

MY CALLING TO CONTEST

On the occasion of my 60th birthday, it was distinctively humbling to receive the amounts of goodwill messages that came from around the world regarding my public service.His Excellency, President Muhammadu Buhari and many other leaders had referred to and commended my “over 30 years of selfless, sacrificial and brilliant service to our country.” National elder statesman and father of Ijaw nation, Chief (Dr.) Edwin Clark applauded my “great and incomparable service to the Niger Delta, the Ijaw nation, and Nigeria”and finally, the historical society of Nigeria of which I am a fellow and lifelong achievement award recipient stated;“thank this brilliant scholar for his contributions to knowledge the great role he played in bringing the teaching of history back to the classroom.”

These are enough summary of my 33 years of Public Service, the first 28 years as a career diplomat rising to become an Ambassador to several important countries in Africa, Europe and Latin America. This was followed by 5 years of service as a high-ranking Federal Permanent Secretary with a reformist mind, track and approach. While serving the Federal Government and leaving robust footprints in all my assignments,I also helped develop my state especially through scholarshipprogrammesto hundreds, recruitment of many into Federal Service and siting of critical federal projects. This is excluding ad-hoc duties on several federal assignments as Secretary to Bayelsa State Government, and front-linePeace Envoy in the Niger Delta to both President Olusegun Obasanjo and late President Umaru Musa Yar’adua. I have also made my mark in the academic and literary world having authored several books, including the 2015 award winning book“Perspectives on Nation State Formation in Contemporary Africa”.

In post-retirement from public service, my singular contributions have dwelt on putting efforts in building a peaceful, harmonious and just society; a nation that represents the best aspirations of our founding fathers and aligning withcurrent global realities. Unlike many of my colleagues who opt to live post-retirement on a well-deserved quiet,I am poised to continue striving towards making my voice to be heard and protect the interests of my people. The forth coming Bayelsa Central Senatorial election therefore,offers me the opportunity to pursue my quest of not relenting in standing in the gap especially for my people and the rest of the nation. I therefore intend to contest the election.

Having parted ways with the People’s Democratic Party (PDP), I have not failed to take advantage of a very welcomingdoorfor relevance and self fulfilment offered to me by the All Progressives Congress (APC) at all levels. I therefore hope to contest the election under APC which I must say at present, controls the heart of majority of the people of Bayelsa State.

No wonder in the results declared by INEC for the November 16, 2019 governorship election, the APC scored 80% in Bayelsa Central and 71% in the rest of the state. This was before thejudgement of the Supreme Court which brought in the current Governor. My decision regarding the APC platform is therefore in sync with the feelings of my people who have chosen that route, and it will be very much insensitive as one of their leaders to act otherwise.

Additionally, this gives us the advantage to work with the Federal government at the center, which has begun to show great responsiveness to our problems including the reimbursement of N38.04 billion expended on federal roads by Bayelsa State government, the N20 billion Naira released for the East-West Road, and construction of the 17-story headquarters of the Nigerian Content Developmentand Monitoring Board in Yenagoa.

If all these are achieved in the past one year, we hope to leverage on being part of the ruling party to bring more to our area, and this I believe is a sound reasoning from which none can take a contrary position.

WHAT WILL I DO?

As a Senator if elected by the grace of God, I will obviously not re-invent the wheel but learn from others there before me. Additionally, I will bring my robust public service experience to render better service to Nigerians in general, and my people in particular. Amongst others, I will strive to:

I therefore call on my co-aspirants, leadership, and members of APC in Bayelsa State to support me to clinch the party ticket. I also appeal to our friends and brothers in PDP to smell the coffee and join to elect me as a Senator.Bayelsa was once a PDP enclave, but we have since moved predominantly to the APC at all levels.

Let us eschew the policy of bitterness, character assassination, innuendo, lies and worse still, violence and anti-democratic tendencies. On the contrary, I look forward to healthy conversations on issues and debates on what bothers us the most as a people. I have been one of your leaders before and cannot lead you astray. Join me and let us move our zone and state further.

May God bless you all!

For the Records Osinbajo: For kidnapping, banditry and all, justice must be seen to be done

“LESSONS OF FIFTY-ONE YEARS AFTER THE NIGERIAN CIVIL WAR ” – BEING PAPER BY AMB. GODKNOWS IGALI, AT A VIRTUAL CONFERENCE HELD ON THURSDAY,...

FG releases N5.2 billion for provision of houses to IDPs in...

A “missive” to Chief Dan Osi Orbih, the Oduma of Africa