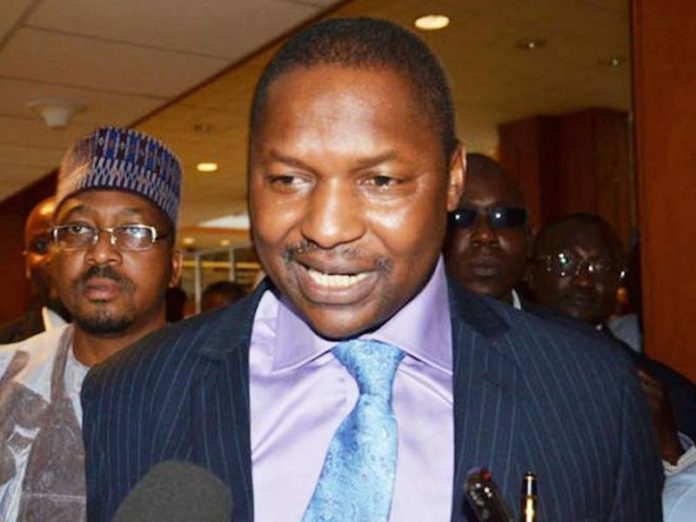 Minister of Justice and Attorney General of the Federation, Abubakar Malami has said Nigeria is expecting at least $200million from the governments of Switzerland and the Netherlands in the OPL245/Malabu Oil Scandal.

According to NAN, Malami stated this at a capacity building workshop and interactive session with judiciary correspondents on Tuesday.

Several groups had asked Malami to give details of properties and assets recovered by the federal government from the Malabu oil scandal.

The OPL 245 scandal has been on for years with Shell and Eni also involved in the case. Both energy companies have been answering cases at various Italian courts, in a case of high governmental interest.

Speaking on Tuesday, the attorney-general highlighted some achievements of the ministry of Justice in the past one year, noting that in line with the anti-corruption fight of the present administration, the sum of $62 billion dollars in arrears from oil companies have been recovered as part of the production sharing agreement (PSA).

“Also recovered within the period is the sum of $311 million from the US and New Jersey in the third phase of the Abacha loot, and another $6.3 million Abacha loot from the Republic of Northern Island,” he said.

Malami said the Abacha loot has been spent on the Lagos-Ibadan, and Kano-Abuja Expressways while the Second Niger Bridge is also a beneficiary of the recovered loot.

Speaking further, the Minister said a new legal framework has helped Nigeria raise more from stamp duties. He said, from a previous N22bn raised from stamp duties per annum, the figure has been tripled to N66bn.

“There are several other acts to regulate emerging digital financial subsector of the economy,” he said.

“Some of these acts will provide for national digital certification authority that will regulate issuance and processing of public and private electronic key validations.

“The expected bills will prepare Nigeria for emerging realities relating to digital cash, bitcom and e-currency.”

Dayo Apata, the solicitor-general of the federation and permanent secretary in the ministry added his voice when he said effective coverage of the justice sector will help prevent injustice in the country.

“This should be done by shining the spotlight on the actions of judges, lawyers and other stakeholders in the justice system,” he said, explaining that the growing interest by the public in what the judiciary sector does necessitated the workshop.

“The public is interested in how the sector handles criminal cases, election litigations, fight against corruption, among others. The above underscores the importance of the media in creating the much-needed awareness that will help shape public opinion and perception,” he added.

“There are also the complaints of sensational reporting, inaccurate presentation of facts or mutilation of context, contempt of court, media trials, among others.

“Therefore, it is our hope that this workshop would strengthen the skills of judiciary correspondents to achieve efficient and effective coverage of the sector.”

Ministry of Interior reiterates commitment to collaborate with SERVICOM institute to...

Beware: Scammers on prowl. How I fell victim (1), By Ehichioya...