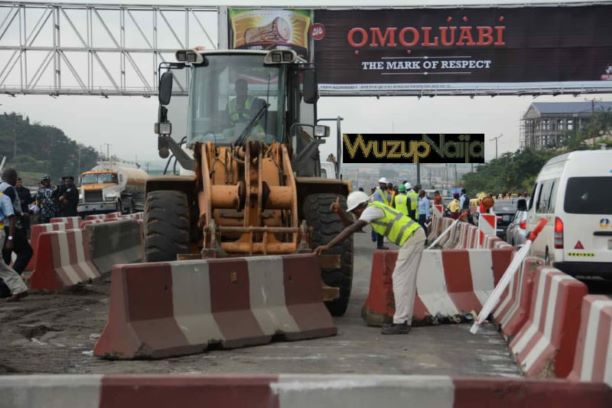 Mr Kayode Ibrahim, Deputy Director Highways, Federal Ministry of Works, Lagos, said that heavy Sunday morning rain stalled completion of the ongoing structural integrity test on Kara Bridge on Lagos-Ibadan Expressway.
Ibrahim, representing the Federal Controller of Works in Lagos, Mr Olukayode Popoola, told the News Agency of Nigeria (NAN) that the rain forced workers to stop work.
“The rain did not allow us to work. It is raining profusely here and we had to suspend action; hopefully, we would have a clear weather tomorrow.
“We have already carried out some tests and the results so far have been positive. The bridge is still intact.
“The test done so far did not indicate that the fire affected the bridge. It is just the surface.
“We will finalise tomorrow because the rain did not allow us to conclude. The tests done so far show that the bridge is still very much intact,’’ he said.
Ibrahim said that the structural integrity test was more than 50 per cent done and with the clemency of weather it would be completed on Monday.
He commended the traffic regulatory agencies who had been on ground to manage the construction zone for the speed achieved so far.
NAN reports that Popoola had in a statement on Friday announced a traffic restriction on the highway for tests to happen on Saturday and Sunday.
The structural integrity of the Kara Bridge came under scrutiny after an inferno from two tankers carrying petrol crashed on each other on the bridge inward Lagos on Sunday, June 21.
(NAN)
Please follow and like us:

A Tale of Two Hisbahs, By Olusegun Adeniyi

Nigerians can get passport issued in 24 hours

Tinubu welcomes Atiku from long holiday: Much ado for nothing? (+the...

Sale of 2022 UTME forms has yet to commence – JAMB