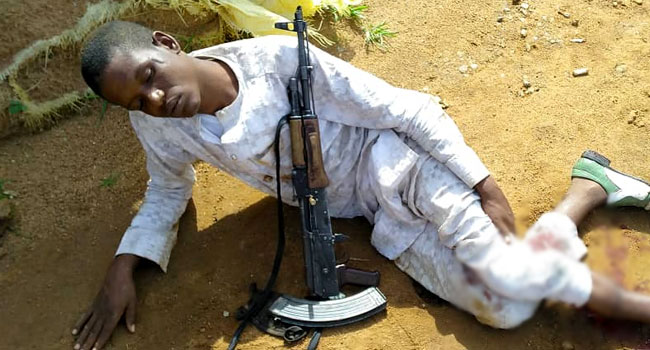 Operatives of the Kaduna State police command have arrested a suspected bandit in possession of an AK-47 rifle.

According to the Police spokesperson in the state, Mohammed Jalige, the suspect was arrested on Friday during a routine patrol along Kudaru forest in Saminaka, Lere Local Government Area.

The suspect was intercepted in a Volkswagen vehicle (Golf) green in colour with Reg.No.KAG 142 AA heading towards Kaduna.

The security operatives noticed the suspicious disposition of the occupants of the said vehicle and tried to flag them down; they immediately parked some distance away and took to their heels into the forest.

The Police Officers, however, engaged them in a shootout of which they succeeded in apprehending one Bello Abubakar and when the vehicle was searched, an AK47 rifle was found concealed in the car.

The police spokesperson said the suspect was undergoing a thorough investigation and was giving useful information to the Police while concerted effort was ongoing with the view to apprehending the fleeing members of the gang to face the full wrath of the law.

The arrest of the suspect followed President Muhammadu Buhari’s vow that his administration would act firmly and decisively ‘‘against any and all persons fomenting or carrying out attacks on our Police Force and other security personnel.’’

The President also gave a shoot-on-sight order, saying “anybody with AK-47 should be shot because AK-47 is supposed to be registered and it is only given to security officials.” (Channels TV)

Cooking gas price goes up to N500/Kg as consumers complain