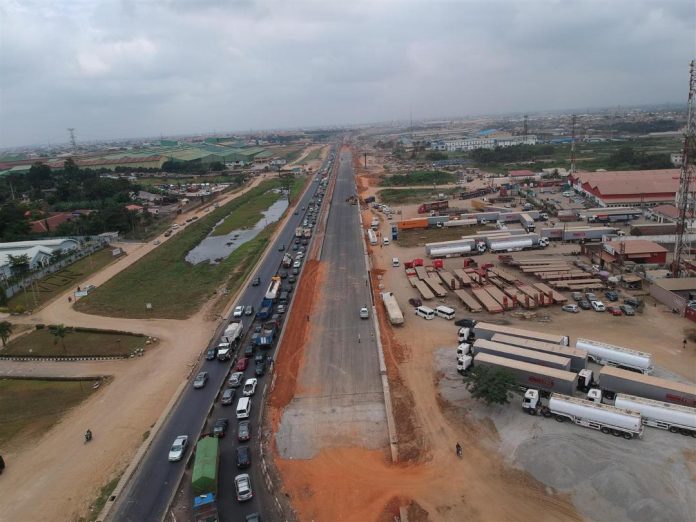 ▪︎Says ruptured pipeline now sealed; situation now normal
Julius Berger Nigeria, Plc., said the situation at the scene of Wednesday’s gas pipeline rupture on the Lagos-Shagamu Expressway (LSE) had been put under control even as normalcy had returned to the area.
On Wednesday, there was a case of gas pipeline rupture around Punch area in Magboro on the busy highway under rehabilitation and reconstruction by Julius Berger Nigeria, Plc.
According to the Federal Road Safety Corps in a statement, “the pipeline got bursted while men of Julius Berger, the construction company working on Lagos-Shagamu expressway were excavating a surface for worksite.”
Julius Berger Nigeria traffic coordinator, Mr Solace Onu, disclosed that the damage to the pipeline could have been avoided had there been a sign warning the constructors of a pipeline underground the area.
Onu added that: “our workers were working on one of the several diversions we are creating to ease traffic flow on the main project when the bulldozer scraped a gas pipeline.
“There was no warning or indication that there was a gas pipeline there. Besides, our bulldozer was just doing minor grading of an already existing earth road to make driving on the diversion easier for motorists. We discovered that the pipeline was not deep into the soil.”
When contracted on the ruptured pipeline at the Lagos-Shagamu Expressway near Punch at Magboro area, Julius Berger’s Spokesperson, Prince Moses Duku said: “We (Julius Berger) are aware of the accidental rupture of the pipeline at the LSE, and our company has, indeed, moved immediately with the swiftness of desirable action to fix the ruptured pipe even as we speak.
“We appeal to motorists to remain calm as Gaslink has been notified of the incident and all efforts are being made in conjunction with other relevant agencies to secure and fix the site today (Wednesday).
“We therefore advise motorists and pedestrians to kindly steer clear of the site and consider alternate routes which we have put in place.
“We will provide updates to this information as the repair work progresses.”
However, true to the assurance given to motorists by the engineering construction company in the country, Julius Berger, and the relevant agencies, by the early evening of Wednesday, had restored normalcy to the site as men of Lagos State Emergency Management Agency, LASEMA, Federal Fire Service and related agencies swung into action to avert any danger.
A visit to the area on Thursday morning by media correspondents confirmed that normalcy had returned to the site save for the closed sections of the road which had yet to be reopened for what Julius Berger said was a “necessary precautionary measure.”
Please follow and like us:

U.S. Presidency: Biden will do the job with the best interests...