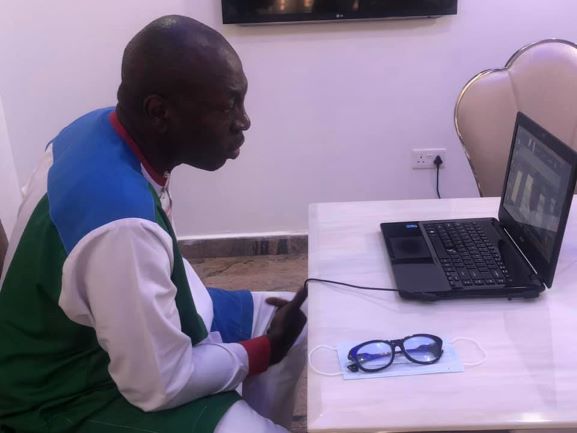 Pastor Osagie Ize-Iyamu, the All Progressives Congress (APC) Governorship candidate in the Edo 2020 election, has restated his commitment to issues-based, non-violent campaign and complete compliance with the regulations of INEC and other relevant health agencies on political campaigns.

Ize-Iyamu stated this on Tuesday during a Zoom meeting with a team from the European Union Delegation, American Embassy, British High Commission, Canadian Embassy and some other EU Member States on issues surrounding our campaign and the Sept. 19 Edo Governorship election

The APC candidate also disclosed his team has requested the elderly remain at home and not join the campaign venues and also developed a constantly-revised crowd management method, alongside distribution of face masks, sanitizers, and temperature checks using infrared thermometers, to ensure the safety of youths and other persons at all campaign events.

He alleged that the PDP continue to incite violence with their rhetoric, including the incumbent Governor’s unstatesmanlike comment on national TV that his immunity is a license to unleash terror without consequences.

“We have constantly appealed to our supporters to conduct themselves responsibly, embrace peace, and focus on selling our documented manifesto, the #POISIMPLEAGENDA,” Ize-Iyamu said.

He commended the foreign partners for their contributions toward ensuring a free and fair election in Nigeria, particularly through the placement of observers and the proposed plan to impose a visa ban on any political actor found guilty of sponsoring violence during elections.

“I encouraged them to carry out -and increase pressure on agencies with such mandate thorough investigations on those responsible for violence as some actors, after causing mayhem, immediately seize the microphone to raise alarm as a way to deceive the public.

“For instance, the Edo State Police Command arrested about seven persons armed with dangerous weapons within the premises of the Chief Anthony Enahoro Complex, which houses the Edo State House of Assembly, on the day the Governor, with regard for the separation of powers, ordered an invasion of the Assembly chambers.

“It is in the interest of all for the security agencies to uncover the sponsors of these arrested armed persons, the party they belong to or work for, and those who assigned to them such criminal and nefarious task to apportion blame and responsibility where it is due,” he added.

APC hails ZLP, others over defection in Oyo

IBB mourns Saleh, says he was an uncommon Nigeria