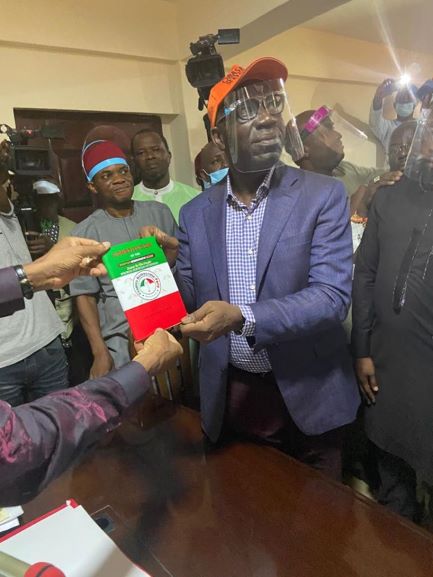 Governor Godwin Obaseki of Edo State has finally joined the opposition Peoples Democratic Party(PDP) where he was formally issued with his party card and other documents pertaining to membership.
The development has ended days of sustained anxieties on the next moves of the embattled governor who was disqualified by his former party, the All Progressives Congress (APC) from participating the June 22 primary election.
His disqualification had foreclosed his earlier plan and boast to contest for a second term in office on the APC platform.
He had claimed that to have performed creditably in his first term and therefore he deserved to be rewarded with the  ticket in the forthcoming governorship.election.
His movement to the PDP was facilitated by some national and influential leaders of the party. Their calculation is to use Obaseki’s  incumbency factor to win the governorship poll.
The governorship poll  will be down to the wire, according to indications, political configurations and political networks of aspirants of both parties.
Obaseki,whose entry into the PDP and the plan to foist him as a fait accompli on the party is unsettling the other aspirants, was received by the stateleadership of the party led by the Chairman of the PDP, Hon. Tony Aziegbemi.
His arrival at the state Secretariat of the PDP along 1st East Circular Road was witnessed by many of his followers and appointees. He went through the formalities of joining and identifying with the PDP amid song and dance.
Meanwhile, there were  reports  that Kenneth Imasuagbon, one of the three candidates of the PDP, originally cleared to contest for the party’s governorship ticket, abruptly cut short a meeting reportedly convened to intimidate him into dropping his ambition for the defecting Godwin Obaseki today at Protea Hotel in Benin City.
Kenneth was said to have stormed out of the meeting, threatening to sue the party for its blatant violation of established rules and provisions in the attempt to compel a ‘consensus candidate’ through the imposition of Godwin Obaseki.
The PDP had already screened and set the date for a primary election before the entrance of Godwin Obaseki.
His disqualification by the Screening Committee of the APC was premised on discrepancies in his academic credentials – an issue first that was first raised by the Edo PDP in the run-up to the 2016 governorship election, which Obaseki won on the platform of the APC.
The PDP aspirants have vowed to fight the attempt by ‘Abuja politicians’ to foist Obaseki on them.
An aspirant, Ogbeide Ihama, in a campaign video released by his team, insisted that he was proceeding with his ambition, and would not succumb to pressure to step down for Obaseki.
Ihama recalled his 13 years in the PDP and assured his spectators that “it is not our portion” to step down.
Please follow and like us:

How I met and married TB Joshua — Wife, Evelyn

Developing: Lawyer to Kanu set to see him on Thursday as...