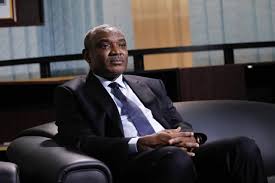 Okoi Obono-Obla, the immediate past chairman of the disbanded Special Investigation Panel for the Recovery of Public Property (SPIP), has alleged that he is being persecuted by allies of Vice President Yemi Osinbajo because of his loyalty to President Muhammadu Buhari.

Obono-Obla made the accusation in a letter which he addressed to President Muhammadu Buhari, explaining his current predicament.

The former SPIP chairman has been declared wanted by the Independent Corrupt Practices and other related offences Commission (ICPC) to answer questions over allegations of forgery and financial impropriety.

However, Obono-Obla, who is said to be out of the country currently, noted that the office of the vice president impeded him from dutifully undergoing his duties.

The former presidential aide specifically mentioned Ade Ipaye, the Deputy Chief of Staff to the President, as the most senior official in Osinbajo’s team who obstructed him constantly because he refused to wait for directives from the vice president before proceeding with his investigations.

The letter read: “The Panel was constituted when the Vice President, Prof Yemi Osinbajo was Acting President. He accordingly appointed one of his Special Assistants, Adeniran Gbolahan, as Secretary. Later I had a bitter disagreement concerning whether or not the Panel should wait for mandates from the Vice President before it can commence any investigation.

“The Secretary enjoyed the support of the Vice President through the Deputy Chief of Staff, Ade Ipaye. Mr. Ipaye sided Mr. Gbolahan against me.”

Obono-Obla alleged he was also encumbered from investigating cases of corruption among some members of the national assembly by the office of the vice-president.

“Mr. Ipaye then wrote a letter stopping an investigation of a case of contract scam reported by Nigerian Ports Authority….. In April 2018, Mr. Ipaye invited me to his office and instructed me not to proceed with the investigation of some members of the National Assembly,” he wrote.

“In February 2019, Mr. Ipaye wrote to me instructing me to suspend the activities of the Panel on the purported ground that Government was reviewing its operations.”

Obono-Obla alleged that the obstruction continued in 2018 when Gbolahan was replaced by Obinna Ogwuegbu, as the new Secretary was also nominated by the vice president and worked hand-in-hand with Ipaye.

The former SPIP chairman also claimed that his travails with the ICPC were instigated federal lawmakers, who conspired against him, and were supported by Professor Bolaji Owasanoye, the anti-graft commission’s chairman.

He alleged that the ICPC Chairman was one of the main “conspirators” who hunted him while he served as the SPIP boss, adding that he had notified President Buhari of the alleged interferences from the office of the Vice President but has not any feedback since June 2018.

The letter read: “I have suffered so much persecution and witch-hunting because of the fact that I have carried out my assignment with patriotism, dedication, commitment and conviction. I don’t deserve this persecution and witch-hunt because of my refusal to be disloyal to Mr. President and allow the office of the Vice President to use the Panel to serve vested interest.

“I was also persecuted by the National Assembly! The whole issue of my purported certificate forgery was masterminded by the House of Representatives to get back at me because I had the guts to initiate an investigation against some powerful Senators.

“I am open to any probe but also the matters I investigate are facts against the Nigerian people and I’m not deterred. Someday Nigerians will know who their true enemies are,” he said.

“I had briefed Mr. President on the 13th June 2018 on all these interference and challenges but no action was ever taken to address all the concerns raised by me.”

The legal practitioner claimed that he has faced ridicule and embarrassment because he decided to be loyal and serve his country diligently, describing his experience as “painful”.

He also stated that the investigative process instituted against him did not follow due process, claiming that the hounding and harassment he has received without being given a fair opportunity to clear his name will discourage persons who desire to serve Nigeria selflessly.

“If I have done anything wrong, I should be removed from office but I should not be humiliated and reduced to nothing. It sends a wrong signal to me that I was given a job which merely exposed me to hatred and attack. And why should that be?” Obono-Obla asked in his letter.

Lagos PDP apologises to Fayose over assault at Ondo rally

FG calls for well-coordinated approach to tackle hunger in Nigeria

WHO confirms first-ever case of Marburg virus disease in Guinea

Trouble brewing as NLC orders strike in states yet to implement...